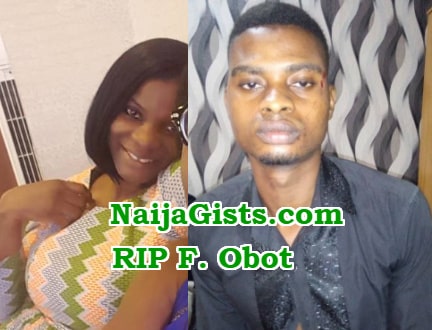 Police in Lagos have arrested a chef Joshua Usulor for allegedly killing a female lawyer Feyisayo Obot, 34, inside a hotel at Opebi, Ikeja.

21-year-old Usulor, 21, was said to have been arrested on February 28, at his hideout in Victoria Island a month after he committed the alleged offence.

According to a statement released Monday evening by police spokesman Chike Oti, a Chief Superintendent (CSP) the suspect sneaked into the victim’s room, stabbed her and slit her throat.

Oti said police investigation showed Usulor had sneaked into the woman’s room in a bid to rob her but she caught and resisted him.

After ensuring that the woman was dead, Usulor, the police said, stole her N26,000 and mobile phone before fleeing the room.

He said homicide detectives were deployed to the hotel after the command received report about a murder in the premises, adding that they collected important exhibits for forensic analysis.

“The body, which had multiple stab wounds on the abdominal region and a throat slit open with a sharp object, was recovered for autopsy.

“The autopsy result revealed that the victim died as a result of Exsanguination (excessive loss of blood), disruption of the left jugular vein and sharp force trauma,” said Too.

Although the suspect absconded after committing the crime, he said Police Commissioner Zubairu Muazu directed the Deputy Commissioner of Police in charge of the State Criminal Investigation And Intelligence Department (SCIID ), Panti Yaba, Yetunde Longe, fish out and prosecute the culprit.

“Painstaking investigation led to the arrest of the suspect, one Joshua Usulor, on February 28, at his hideout in Victoria Island Lagos.

“During interrogation, the suspect confessed to have committed the crime. He said he never knew the victim before and only wanted to rob her to offset his own hotel bills because he had spent two days above what he paid for.

“To execute his plans undetected, he claimed he sneaked into the deceased’s room to steal her money and her phones but she struggled with him. He overpowered her and then stabbed her with a sharp knife on the stomach.

“He used the same knife to slit her throat. Satisfied that the woman was dead, he made away with her phones and a cash sum of N26,000 only.

“Investigation revealed that the deceased was a lawyer from Abuja who came to Lagos for a business meeting and lodged in a hotel at Opebi, Ikeja,” Oti said.

According to him, the suspect would be charged to court for murder while the casefile would be duplicated and sent to the Director of Public Prosecution (DPP) for legal advice.