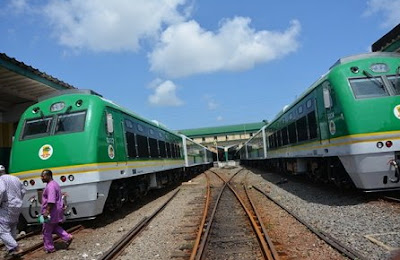 After several years of hard work by diligent engineers, the long awaited Abuja rail is finally here. By Christmas, you could walk out of the plane at the Nnamdi Azikiwe International Airport Abuja and walk into a train that will take you straight to the business districts of the nation’s capital.

That was the Federal Capital Territory Administration Transportation Secretary, Kayode Opeifa assuring that the Abuja Light Rail project will kick off in December.

Okpeifa said the FCTA was committed to the rail mass transit project and will launch it at the end of the year.

Opeifa reaffirmed the position of the administration during a familiarisation visit to the vehicle inspection office.

Opeifa, who expressed satisfaction with the pace of work done so far, further disclosed that the project has attained 98 percent completion, adding that the rail project would drastically ease transportation challenges in Abuja when operational.

“As we all know, this project will address immensely our nagging transportation issues in and out of the city,” he disclosed.

FCTA, he said, is working assiduously to address whatever that may constitute a challenge against the project from becoming operational in due time.

According to the Opeifa, when the project finally takes off, it would further add to the achievements of the President Muhammadu Buhari-led government.

He called on Nigerians to continue to support the change agenda of the President which was hinged on making Nigeria great in the comity of nations.

He commended the FCT Minister, Muhammad Bello for his dogged commitment to ensuring the project takes off in due time.

“We need to commend the Minister for his courage in seeing to the timely completion of this very critical project,” he said.