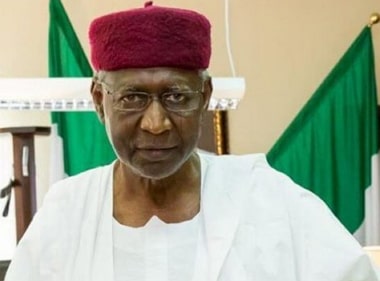 President Buhari’s Chief of Staff, Abba Kyari has been moved to Lagos for treatment of his coronavirus infection, sources told P.M.News last night.

Lagos has a better facility at the Mainland Infectious Hospital in Yaba.

Kyari was initially been treated at the University of Abuja Gwagwalada Taeching Hospital in Abuja.

Kyari, who returned from Germany on 14 March tested positive for coronavirus on Monday, triggering huge panic in the Presidential Villa in Abuja and outside on the possibility that he may have spread the virus to his contacts.

The COS who didn’t self isolate himself after the trip has been blamed for the current outbreak at Aso Rock.

At the moment, three workers in his office have tested positive, but both President Buhari and Vice President Yemi Osinbajo have tested negative.

There are fears that many contacts of the President’s chief aide may have contracted the virus through him.

Among the contacts is Africa’s richest man, Aliko Dangote, who sat with Kyari at the wedding of the son of Police IG, Mohammed Adamu in Abuja on 14 March.

Both actually travelled to Germany together.

On Twitter on Tuesday, Nigerians called out the engineer to quickly self-isolate. They also criticised him for hosting the American ambassador Mary Beth Leonard on 19 March

Boss Mustapha, Secretary to the Government of the Federation, who now heads the Presidential Task Force on COVID-19 is also another Kyari contact.

So was the Inspector General of Police Mohammed Adamu.

Kyari visited Kogi State Governor Yahaya Bello on 17 March on his return from Germany, to deliver Buhari’s message to Bello at the prayers marking the eighth day since the death of Bello’s mum.

Lai Mohammed, Akume, Shehu were all at the event.

Kyari travelled to Munich, Germany, on Saturday 7 March and returned on 14 March.

He went to meet with officials of Siemens over the Nigerian electricity expansion programme.