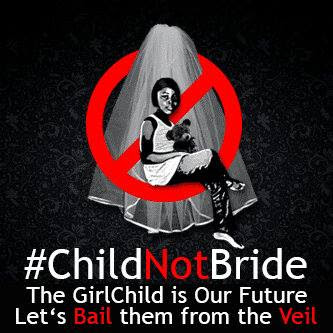 The latest and greatest shock of shame rocking the Nigerian nation is the fact that Senator and former Governor Ahmed Sani, the Yerima Bakura, has finally had their way.

The Nigerian Senate has bowed to Yerima’s will and agreed to be silent about the age that young girls can get married in Nigeria.

What this means once it is followed through and en-shrined in our laws and Constitution is that girls that are as young as nine years old, provided they are deemed as having been
”physically developed enough” by their suitors, could be law fully bedded and married in our country.

As youth Advocates and young Nigerians with a conscience, GNEXT CREW NG will not fold its arms and watch this shameful ACT by the Senate and what they seeks to do in the future.

GNEXT CREW NG a non profit making youth based organization in Lagos, is set to kick off a campaign across the nation.

Speaking through its President JOHN NSIKAK HAMILTON in Lagos yesterday, described as sad and retrogressive the annulment of constitutionally recognized age for adulthood by the Senate saying this would further debase woman hood in Nigeria.

Hamilton said that Gnext crew will be Organizing a concert tagged ‘GIRL POWER CONCERT‘ a program we intend to put together in collaborations with the Lagos state ministry of youths and sports, is aimed at empowering the girl child to ‘SAYING NO TO EARLY AND CHILD MARRIAGE’ we choose Music as a tool of our campaign based on it power to draw attention captivating the mind of its listeners.

The campaign which is expected to kick start in the premises of the women development center in Agege,Lagos. Will be going round to the rest of the states of the federation.