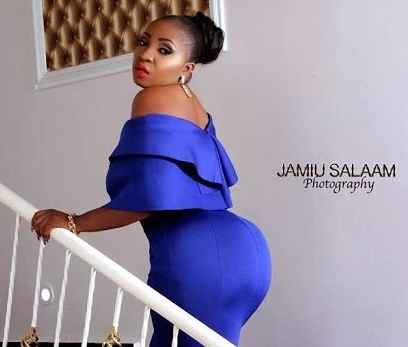 December 23, 2017 – Actress Anita Joseph: I Get Advances From Men Daily Because Of My Butt

Nollywood Ukwu babe, Anita Joseph in a recent chat with Saturday Beats, acknowledged that men would usually give her a second glance each time she passed them.

However, the bum reduction is not in the offing at all for Anita.

She said, “It has never occurred to me to reduce my bum. No, why will I do that? Reducing my bum will be me mocking God for what He has blessed me with. I can’t even add weight because if I do, my bum would become massive. People pay to make their bum big, why would I reduce the natural one God gave me for free? Please leave my bum, it’s from God, undiluted.”

The actress made it known that she was in a serious relationship but refused to reveal the identity of her man. She simply said, “I am in a relationship but my boyfriend is not in the entertainment industry, I would say that our meeting was a miraculous one.”

Commenting on how the year treated her, Anita told Saturday Beats that 2017 was a financially rewarding year for her. “This year has been wonderful and I can’t complain but I know 2018 will be better and more promising. I see a greater year ahead. Yes, it has been financially rewarding and I thank God for that. I travelled out of the country for business and pleasure. I had worked too hard and I deserved the rest,” she said.

Yoruba Actor Antar Laniyan: Why They Call Me The Dreadful Tiger
What Lies Within Nollywood Movie Becomes The Biggest Winner At BON Award 2017