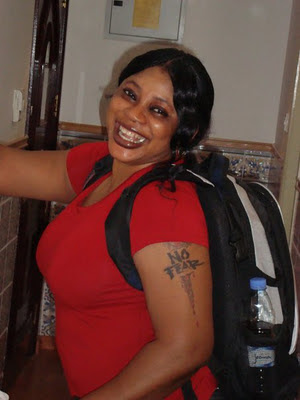 Nigerian actress Ayo Adesanya who recently parted ways with her former lover, Goriola Hassan has come open to reveal her state of mind.

The talented mother of one said she wasn’t legally married to her ex-lover.

In a recent interview, here is what Ayo Adesanya said about the challenges of being a single mother

Women are naturally mothers and I think it works easy because it comes naturally. We just have to take care of our kids even when we have to work. But it hasn’t been easy because I could go to work for like three days without coming home, and my son has to go to school. When he was younger it was a challenge because most times I had to take him along whenever I’m going on location. But now, he’s getting older, and  a lot easier because I could go to work and all I have to do is talk to him on the phone. But any little opportunity I have to be at home, I grab it. That’s why my social life is not all that wow because I like being with my family.

When queried about her arm tattoo, here is what the actress said:

I still have it but it’s fading off gradually. I recently had a surgery. I’m supposed to have gone for another one. I’m clearing it off but it’s so painful. It gets swollen and too painful.

I tattoo aspart of fashion. I actually went to a church to pray and they gave me a Bible verse, I never knew it was against Christianity.

Until the Pastor opened a passage that I should read, and that was how I knew. It’s actually so beautiful when you have tattoos but immediately I knew it was a sin then, I made up my mind to clean it.

Ayo Adesanya however forgot to mention the particular passage quoted by the Pastor who told her Tattooing is a sin.

According to professional amebos, the actress dated Fuji Musician Wasiu Pasuma Alabi before she moved on with Goriola Hassan.

Pasuma also confirmed it in an interview he granted in January.

The person I was supposed to have married was Ayo Adesanya. I love her so much. Everybody in my family knew her and knew that I wanted to marry her. – said the musician.