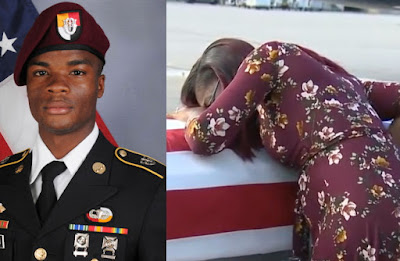 More remains a U.S. soldier killed in Niger in October have been recovered, the Pentagon said on Tuesday, raising fresh questions about the circumstances surrounding Sgt. La-David Johnson’s death.

A military investigation team discovered the remains on Nov. 12 as part of a probe into the Oct. 4 attack that resulted in the deaths of Johnson and three other soldiers, spokeswoman, Dana White, said.

The circumstances surrounding the mission came under scrutiny when it came to light that Johnson had gone missing after the troops engaged in a firefight with an Islamic State-affiliated group.

His body was not recovered until two days later.

Boubacar, a resident of Tongo Tongo village in Niger republic, said in a phone interview that he informed the village’s chief after seeing Johnson’s body. “His two arms were tied behind his back. The back of his head had been smashed by something, possibly a bullet or hammer”.

Johnson’s death also drew media attention after President Donald Trump called his widow in an exchange that she characterised as insensitive.

Continue Reading
You may also like...
Related Topics:isis, killed, niger, Soldiers, us