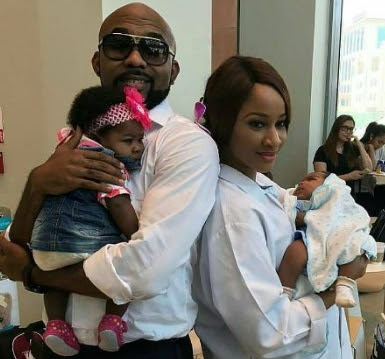 Fresh from featuring in the popular hit movie, The Wedding Party to marrying one of the most-sought-after bachelors in the entertainment industry, Banky W, the lovely diva shares with Inside Nollywood her plans for 2018.

“In 2018 you should expect a lot from Adesua. A lot of big things, good things, amazing things coming up next year.”

The newly wed also gave a hint about her Christmas wish, “I want to continue to remain happy and hope that the share of the happiness of the season is spread to everyone out there.

I also hope that people, most importantly remember the reason for the season,” she said.

Recalling her labour room experience in the block buster movie, The Wedding Party 2, where she gave birth to twin babies, Ms Wellington noted that it was quite an interesting role to play.

“I haven’t had a child before, but I had the opportunity to be around people that are pregnant and I did a bit of research too in order to interpret my role well. I had a load on my shoulder trying to portray that role effectively.

Those who have had babies before would know if I wasn’t getting it right, so I had to pull on the experience I have been around people that have been pregnant,” she added.