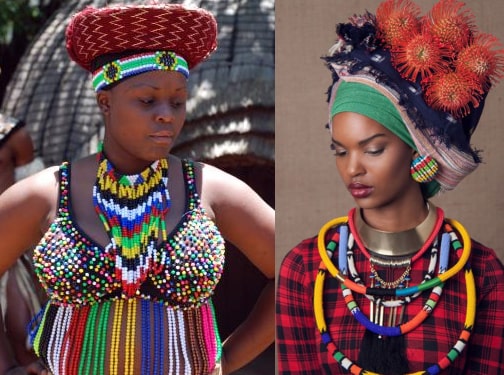 Beads are often worn while expressing art for example, in Nigeria, Kalakuta queens at Fela’s shrine were often adorned in colourful beads while performing on stage.

Beads are used in various parts of Africa as adornment or works of art. Beads can be in form of an anklet, bracelet, waist chain, necklace, rings, and earrings e.t.c.

Most importantly, they served as adornment because it helps in defining and identifying someone’s status, as well as what tribe or group they belonged to.

The use of beads in Africa can be traced back at least 12,000 years. The oldest known beads have been found in the Kalahari Desert, Sudan and Libya.

The earliest beads were made of eggshell, clay, twigs, stones, ivory and bone – glass beads were introduced later by traders from Europe, India and the Middle East.

In the 18th and 19th centuries, millions of colored shell beads were shipped from European countries to Africa in exchange for slaves.

The beads made at that time were referred to ‘trade beads’ because they were used in exchange for goods or used as currency.

The oldest African jewelry ever discovered was recently found, in 2004, in the Blombos cave on the southern tip of South Africa. They are estimated at being over 75 000 years old and are pea-sized, mollusc shell beads that had been pierced.

Interestingly, Craftsman in Africa have continued to produce their beautiful traditional bead work unique to their tribe or region. Selling and producing beads and then jewelry from them has been a major source of income.

Besides their role as physical adornment, beads are among the oldest known symbols used by mankind, some of them sharing time and space with the earliest known cave paintings and symbols are a physical manifestation of an advanced thought.

As such, beads have religious, social, and decorative properties. In Africa, more than any other region, they have long played a prominent role.

Cowry shells can be found throughout Africa and are probably the most used decorative symbol on the continent.

Ghana was and still is the largest producer of beads in Africa; the Ashanti and Krobo people make them from ground, powdered glass that is uniquely identifiable.

In Mozambique, indigenous gemstones are a popular medium.

Zaire (Democratic Republic of the Congo) is known for stone beads.

Uganda is leading the way by making beads from re-cycled paper.

In Ethiopia, men and women of the Hamer tribe both wear headbands, armbands, necklaces and chokers of bead.

The most complex use of beads anywhere in Africa must be the rituals of courtship and marriage among the Zulu. Zulu beadwork is actually a language system where colors, patterns and items of apparel convey specific meanings.

Zulu men wear beads to show commitment to women they intend to marry. Because of incestuous implications, mothers, sisters and daughters never give beads to their male relatives.

However, the most recognized ‘bead makers’ in Africa are the Maasai women of kenya.

The beads and their color represent their culture, including their love of cattle. Colors are also meaningful; red signifies bravery and green stands for the health of their cattle

In Egypt long ago, nobles adorned their pets with beads. Today, many people adorn their dogs with jewelry and pet clothing. We still have that age old basic human emotion that loves to adorn with jewelry.

Continue Reading
You may also like...
Related Topics:african, beads, history