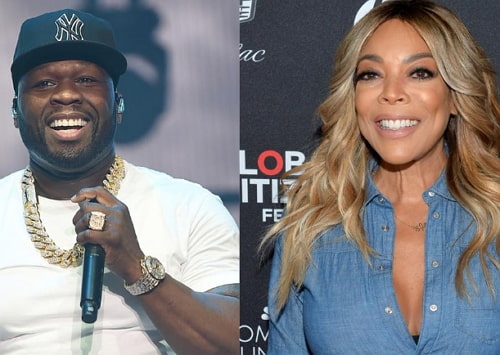 US talk star, Wendy Williams has said she will explain the true root of her beef with 50 Cent when her talk show resumes on 16 September.

She gave the indication on Monday, when she appeared on an interview programme, Hollywood Unlocked.

In the last one week, 50 Cent and Williams have been exchanging words over whether 50 Cent really shut her out of his Tycoon Pool Party. Wendy has released several statements claiming otherwise. 50 Cent even escalated the feud by using invectives against her, calling her ‘ugly, monster, motherf****r.

She elaborated on what happened in the interview.

“Elizabeth [New Jersey] cops go…they fall down, they throw up, they get up, they hold my hand. They were excited to see me. Like I knew 50 was going to be there, but I was only there to see Snoop. To say, ‘Look my boy is now 19. Let’s take a selfie.’”

“I was there to see Snoop and leave,” she reaffirmed. She explained that she didn’t realize that it was Fif’s party until she got to the venue. ”

Williams said she was surprised that 50 Cent twisted the incident into something it wasn’t.

During the interview, she however refused to talk about her estranged husband, Kevin Hunter.

“Kevin and I were together. And only I can talk bad about him,” She said.

“And I do often. In the mirror. Privately, in my bathroom, in my bedroom. Over there and close the door. And yes I do. Don’t talk bad about him, because it wasn’t all bad. But, you know, he f’d up…. I don’t know about you, I’m not raising another family. Like I can’t.”