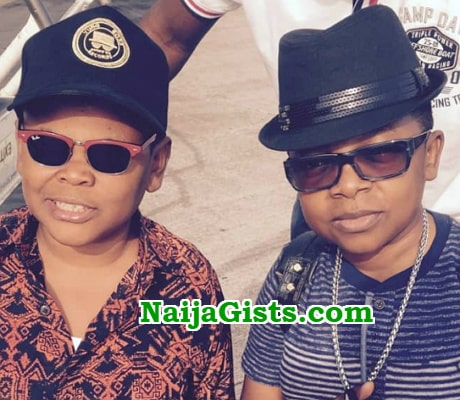 Aki And Pawpaw Life Story: How The Nollywood Comedy Duo Weathered The Storm To Become Superstars

Nollywood star Chinedu Ikedieze  Aki, and his partner Osita Iheme aka Pawpaw, are many things rolled into one. Call them mischievous twins, inseparable duo, blood brothers or comic actors for their roles in movies and you may not be wrong.

Aki and Pawpaw are indisputably one of the most famous and loved actors in Nollywood today. Since destiny made their paths cross, after featuring in the 2002 comedy flick, Aki Na Ukwa, the duo have succeeded in the comic revolution of the Nigerian movie industry.

Success however didn’t come easy for them. and when the duo had almost given up on acting, luck smiled on them as they were casted in the film that eventually gave them the much-needed break in the industry.

The instant smash success of ” Aki Na Ukwa” changed their story and ensured that the duo became superstars overnight. What the duo lacked in height, they made up in their enviable talents. Many are fond of the screen twins because of the mischievous roles they play in movies and how they always complement each other’s effort. Following their mischievous roles, most parents at some point were tempted to stop their wards from watching their movies to avoid being influenced negatively.

The duo once traced how the Aki and Pawpaw brand was created years back. Speaking at the candlelight/tribute night in honour of the late film maker and marketer who created the Aki and Pawpaw brand, Chukwuka Emelionwu, popularly known as Kasvid, Osita Iheme recalled how he met and became friends with Kasvid who also produced popular movies such as Mr. Ibu in London, The last Burial, August Meeting, Isakaba, Aki na Ukwa among others.

He said, “Kasvid was my boss who later became my friend. I met him in Enugu in 2002. Then, I was based in Aba, where I was nurturing my acting skills. I decided to relocate to Enugu to hustle. While in Enugu, Kasvid was shooting a film. When he sighted me, he developed interest in me.

He just believed in me immediately he sighted me. The late film maker created the Aki and Pawpaw’ brand. “ Kavid asked me if I would like to go into acting. I told him, I have been into acting way back in Aba. He then asked me again, do you know Chinedu Ikedieze who featured in Last Burial? I answered him in the affirmative. Then I didn’t know he was the producer of Last Burial. Later, he invited a writer to write a script around Aki and I.

That was how the movie, Aki na Ukwa came about. Also sharing his nolstagic moment with man that brought him to limelight, Chinedu Ikedieze recalled how he met the late film maker while he was an undergraduate at Institute of Management Technology, IMT, Enugu. “I went for an audition, and he saw one smart looking small boy and he immediately developed interest in me. A week after that encounter, he visited me in my hostel on campus.

Kasvid took a risk in us. He invested his money in us. He saw something in us that other producers did not see. He made us who we are today.” Over the years, Aki and Pawpaw have remained inseparable, almost like blood brothers. They have stayed true to their crafts, bringing happiness and joy to many homes in Africa and beyond. The relationship between the duo however suffered setbacks few years ago.

In recent past, they have been doing separate jobs. Reports had it that problem started between them when Chinedu got married in 2011 and asked Osita to vacate the flat they shared together for him and his wife. This, according to reports, put a strain on their relationship. But refuting the rumour in an interview, Chinedu insisted there was no time he had issue with Osita.

“I just finished shooting a film with my friend, Osita (Pawpaw). We have not been working together like in the past because we are both engaged in different projects. I am still shooting ‘The Johnsons family’ series.

When they gave us a month break, I quickly went to shoot two films with Osita. I have kept many producers waiting, but some of them looked for other options. I am busy, Osita is busy too. We don’t have any problem. I don’t like people spreading rumours.

The chemistry between me and Osita is still there, on and off the screen as he is more like a brother to me.” Also, dismissing the rumour, Osita stated that he still has a good relationship with his screen brother. While it’s obvious that the duo cannot remain together forever, the impact they have made on the Nigerian entertainment industry continues to re-echo in the minds of those that love and adore them.

Apart from starring in movies, Chinedu and Osita have also made a mark in other areas of human endeavour, signing mouth-watering endorsements. They collectively established Aki and Pawpaw Entertainment and have produced some films to their credits. They also own the Aki n Paw Child Care Foundation. The actors have also won many awards. In 2007, Chinedu received the Lifetime Achievement Award at the Africa Movie Awards.

After more than two decades in the movie industry, it’s obvious that the actors are among the greatest figures to emerge from Africa in the 21st century. But the difference is that, while Aki is happily married, Pawpaw is yet to unveil the love of his life to the world.

Wedding Bells For Adediwura Adesegha
Ronke Odusanya: My Baby Father Saheed Jago Has A Child But He Is Not Married