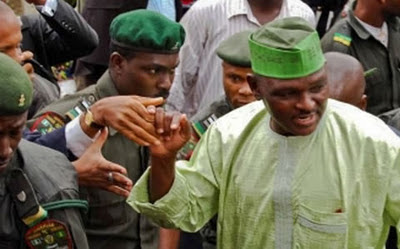 It is no longer news that the notorious Major Al Mustapha, the former Chief Security Officer, CSO, to the Late dictator General Sani Abacha drove me into exile in the USA. What is news happened late last week when a Federal appeal court in Lagos, Nigeria freed Al Mustapha of all counts of Capital Murder of Kudirat Abiola, the wife of the late Chief MKO Abiola, whose annulled June 12 1993 election victory plunged Nigeria into political anarchy; which almost led to the break-up of the Country. During the reign of Abacha, Al Mustapha terrorized the country to no end. Even then, serving generals were afraid of him. Now a feckless appeal court and a bungling prosecuting team have freed this murderer, who wanted to kill me and hang my hide in ASO Rock for dart games is now breathing the air of freedom made possible by democracy, which he so persecuted us for because he wanted Abacha and the Military to rule forever.

Suspicion has arisen that this judgment which freed Al Mustapha may not stand the smell test. Consider what has happened since his freedom. The Military authorities in Nigeria have made it known that Al-Mustapha is still in the army and will soon be decorated with a new rank of Brigadier-General presumably the rank of his mates (since denied by the military). It cannot be said that the Military authorities will gleefully announce that a disgraced and fallen murderer would be promoted without ASO Rock having no inkling of the development. A man who pursued me in Abuja in 1994 to 1995 with Vengeance detaining me in Alagbon, (Lagos), Wuse, Kuje (Abuja), detention Centers and finally sending a 20-man Killer squad made up of soldiers, State security services , SSS, operatives and Policemen to arrest me and finish me off is now allegedly to be promoted to a two –star general for all the atrocities that he committed with his Boss, Abacha. Could this be a desperate political play by President Goodluck Jonathan’s 2015 calculations?

What do we tell the family of Bagauda James Kaltho, a Journalist Colleague of Mine at the Abuja Bureau of THE NEWS / TEMPO/ PM / News, who succeeded me as bureau chief after I fled to the USA, who was eventually murdered by the goons of Al Mustapha and his body dumped at the Durbar Hotel, Kaduna and destroying his name by blood-labeling him as a bomber?. I cannot believe that a civilian government will attempt to use a serial killer like Al Mustapha for any useful purpose in a democracy, which the Yobe-born Major fought so hard to abort. A military major who, on account of his activities, dislocated my life and that of my family and barely escaped his killers by the grace of God. We wait to see what the powers that be in Abuja are planning with the schemed release and probable elevation of Al Mustapha.

Since President Jonathan does not know history of those who fought for the democracy that he is enjoying now, I call on him to promote Al Mustapha to a four Star general and make him his chief of Army Staff so that he can make history to repeat itself.

A writer wrote that those who fail to learn from history are doomed to repeat it.

I hope Jonah is listening. Any role for Al- Mustapha so soon after his technical acquittal of murder of numerous Nigerians whom he killed in cold blood would make the Nigerian President an accomplice of Abacha and Al Mustapha, to be spitting on the graves of the heroic Nigerian fighters for democracy, many of whom lost their lives, and many scattered in exile un-rehabilitated.

Al Mustafa’s quick rehabilitation in the book of President Jonathan taught me two lessons: this kind of swift rehabilitation of murderers and criminals is the reason why not many are willing to die for Nigeria and which is why Nigeria under President Goodluck Jonathan has become one of open sesame of Looting, Kidnapping, and abuse of Presidential Power.

The Ingrates who inherited power have forgotten the blood and the suffering of the patriots who fought Abacha to a stand still to smoothen their way to Aso Rock and are now behaving like drunks who do not know how democracy came to the country. At the appropriate time we will tell them.