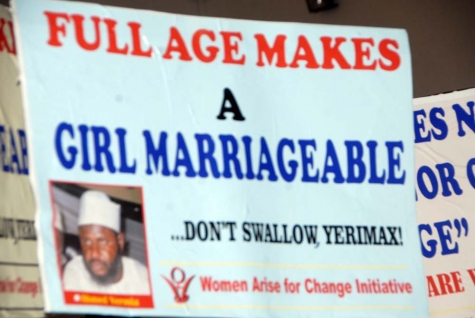 Women’s rights stakeholders today in Lagos called for Section 29(4) (b), the proposed constitutional provision by which female children would be marriageable, to be expunged from the Nigerian constitution.

Organized by the Women Arise Initiative for Change and moderated by a former Minister of Education, Oby Ezekwesili, the stakeholders’ conference, which saw the assemblage of various advocacy groups and experts on child rights, criticized the idea and those who supported it.

The meeting was held against the backdrop of the widespread nationwide condemnation of the proposed constitutional provision, and participants, describing it as obnoxious, were unanimous that it must be expunged from the nation’s constitution.

In a communiqué issued after the conference, stakeholders also called on State Houses of Assembly that are yet to domesticate the Child Rights Act to do so immediately and maintain the marriageable age at 18 years.

They also called on Nigeria, as a responsible member of the international community, to immediately domesticate and fulfill her obligations with regards to all International and Regional treaties on women such as CEDAW, without further delay.

Furthermore, the communique called for all known violators of the Child Rights Act and Laws in all the states of the Federation to be prosecuted to serve as deterrence to others.
According to Mrs. Ezekwesili, copies of the communique were immediately forwarded to the leadership of the Senate in Abuja.

The stakeholders’ communiqué is reproduced below:

Communiqué of the Stakeholders’ Meeting on the 1999 Constitution Amendment as it relates to Women and Girl Child’s Right organized by Women Arise at the Airport Hotel, Ikeja on July 25, 2013

The introduction of religion as a tool of confusion by Senator Ahmed Yerima which led to a second vote that ultimately defeated the popular votes that supported the deletion of the obnoxious provision of Section 29 (4) (b) is really worrisome and a cause for serious public concern. The stakeholders’ meeting was therefore called to mobilize existing popular public opinion against the actions of those that are bent of using the platform of the Senate to advance the violation of the rights of the girl child . The objective of the stakeholders’ meeting of today is to mobilize public opinion, the National Assembly and the State Houses of Assembly to protect the rights of women and the girl child.

After extensive deliberations on the above aforementioned, we the undersigned on behalf of ourselves and different organizations hereby at the Stakeholders meeting do resolve to do as follows:-

That we unequivocally demand the deletion of Section 29 (4) (b) of the 1999 constitution of the Federal Republic of Nigeria as originally proposed by the Senate Committee on Constitution Review.

That State Houses of Assembly that are yet to domesticate the Child Rights Act should do so immediately and maintain the provision of marriageable age as 18 years.

That Nigeria as a responsible member of the international community should immediately domesticate and fulfill her obligations with regards to all International and Regional treaty on women such as CEDAW without further delay. 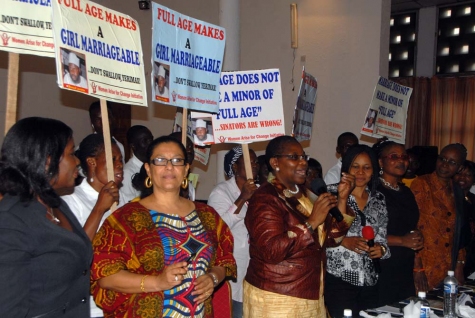 The Violence Against Persons Bill pending before the National Assembly and the Gender Equal Opportunity Bill before the State Houses of Assembly should be passed without further delay;

All known violators of the Child Rights Act and Laws in all the states of the Federation must be prosecuted to serve as deterrence to others.
Women organizations and all supportive Civil Society Organizations, Community Based Organizations, NGOs and Social Organizations shall form a broad coalition to continue monitor the National Assembly and the State House of Assembly to ensure the deletion of section 29 (4) (b).

That Girls and Women issues that have come to the centre of public agitation should be mainstreamed into all aspects of public policy.
We adopt the letter delivered to the leadership of the Senate by Gender and Constitution Reform Network (GECORN).

Latest News On ASUU Strike 2013: New Deal With Nigerian FG Rejected “We’ll Not Call Off Strike” – Officials
Al-Mustapha Wanted To Kill & Hang Me Inside Aso Rock; How He Drove Me Into Exile In The USA – Alex Kabba