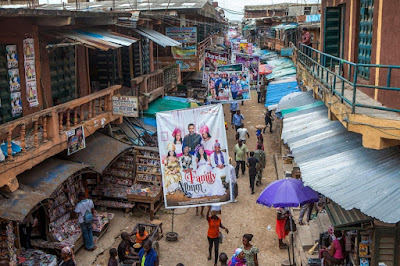 There is tension in the furniture section of Alaba International market in Ojo local government after the police reportedly recovered catch of arms and live ammunition in the market in Lagos State western Nigeria.

We gathered that detective from Area E Festac Command stormed and recovered high caliber guns such as pump actions, double barrels, short guns and live ammunitions in the market.

Thus, the leader of the market, Mr Emeka Mozoba and some of the security men in the market were arrested and detained at Festac police command.

The discovery and arrest caused panic in the market as some of the executives went into hiding to avoid arrest.

We also gathered that the whole thing was happening at the same time the market union and some traders are at logger head over demands for N300,000 per shop for the occupants by the union.

When our reporter went to the market, to meet with the chairman, some of the traders confirmed the arrest and directed our reporter to Area E command, Festac where they were detained.

At the command, Mozoba was seen at the command premises but was not detained in the cell with other suspects.

Mozoba who confirmed to our reporter that he was summoned by the area commander over market issue, denied having knowledge of the arms and ammunitions.

He also said he heard the rumour that arms was recovered at the market but as the chairman, such information was false and targeted to blackmail the leadership and the union.

He also admitted that the union had issues with some traders who he alleged was behind the false information.

However, our reporter gathered from the traders that the police actually recovered arms in the market.

Some of them who spoke to our reporter said the police recovered guns used by security guards.

Efforts to reach the area commander concerning the matter proved abortive as our reporter was told he went to Ikeja police headquarter over the matter.