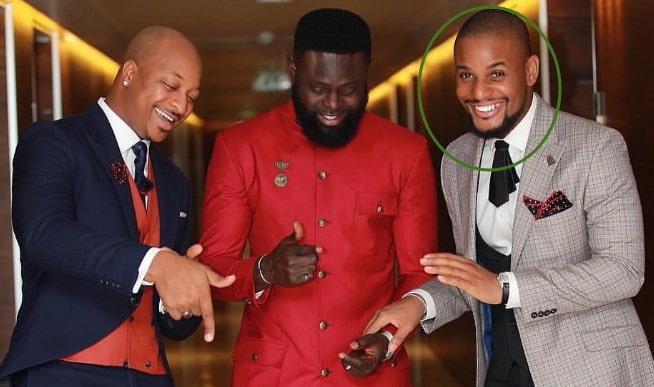 Nollywood actor Alexx Ekubo who is fond of playing Lover boy roles in movie has revealed for the second time this year why he plays such roles.

In a chat with The Scoop, the handsome actor said:

“We don’t shoot action or science fiction movies in Nigeria; so, we end up making comedy movies and dramas.

It’s either one plays the character of a boyfriend or husband. However, in recent times, I have acted a lot of roles that don’t portray me as a lover boy.

I have never got tired of playing a lover boy (role). But before acting in movies, I consider the script. If I cannot connect with it, I would not accept it. If the script does not speak to me, I will not go for it.”

Meanwhile, it is not news that Ekubo has a very close relationship with his friends, IK Ogbonna and Yomi Casual. They often attend events together, dress in similar attire and have the same type of cars. Their friendship has also sparked some rumours, with some insinuating that there is more to it than meets the eye. Speaking about his closeness to his friends, Alex said;

“We are in the same business; so, we often get invited to the same events.

There are lawyers and other professionals who have friends doing the same job with them, and they will invariably be together a lot of the time.

But you don’t know them because they are not popular. So it is not strange that I am very close to my friends who are in the same profession with me.”

Ekubo also stated that he came to Nigeria to vote in the last elections instead of staying in the US to attend the Oscars with his girlfriend, Fancy Acholonu.

“It wasn’t a publicity stunt. I actually travelled down to Nigeria from the US to perform my civic duty. I felt great that I was part of the electoral process. It was also heartwarming that a lot of people came out to be part of the process, and I hope that more people will get involved in subsequent elections.”