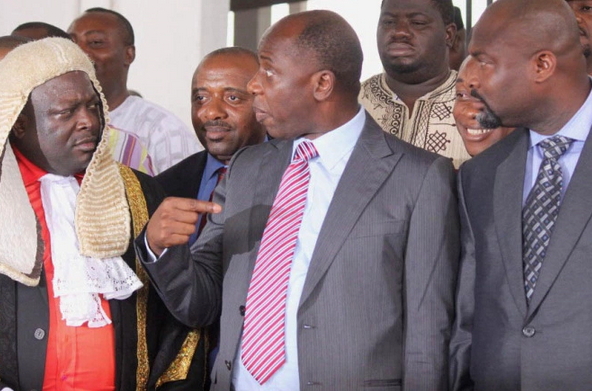 August 4, 2015 – Amaechi: I Fought Jonathan Because He Increased Fuel Subsidy From N300 Billion To N1.3 Trillion

Ex-Rivers Governor Rotimi Amaechi said on Monday in Abuja that the victory of the All Progressives Congress (APC) in this year’s general elections was engineered by God.

Amaechi said this at a reception organised for him by the Committee of Friends at the International Conference Centre, Abuja.

He said God engineered the victory by giving the APC a good and credible presidential candidate, which enabled the party to win the last election.

He thanked all members of the party for working hard during the campaign, saying the victory was for all party members.

“Amaechi did not contribute more than you did. We all worked together; in fact, it will be unfair for us to claim the glory.
“This is because I believe that the victory of APC was engineered by God.
“And I saw it coming and told my friends that we would win. People thought I was a political mathematician.

“The more I prayed, the more God gave me the confidence that we would win.
“One of my prayer points was `God, do not tell me You will protect me after we lose; protect me now by making sure that we win’; and we won.”

Amaechi, however, stressed that APC must deliver, as the citizens would hold it accountable in 2019.

“We will not disappoint Nigerians. We believe APC governors are progressives and therefore, they cannot afford not to deliver.”
The former governor said that the struggle had been quite challenging since he joined APC, adding that the state’s allocation from the Federation Account had reduced grossly.

“From 2013, we were receiving N6 billion; by the time I left office, our wage bill monthly was N9.2 billion.’’
Amaechi recalled that when the state was receiving about N20 billion monthly, he employed more teachers for the university, college of education, polytechnics as well as secondary and primary schools.
He said that the increased wage bill of N9.2 billion was because more people were employed in the state.

Amaechi thanked the organisers for the reception in his honour.

The National Chairman of the APC, John Oyegun, said Amaechi had the ability to struggle, fight and win power, describing him as “hyper-active”.

“Amaechi brought passion and energy into APC and he was aware of the risks of failure. The man we are celebrating today deserves honour,” Oyegun said.
Gov. Nasir El-Rufai of Kaduna State and Chairman of the occasion, said Amaechi had transformed Rivers within the seven years he governed the state.

“I know this because I have visited Rivers many times and have seen the work he did.
“The primary schools in the state are better than some state universities.
“He also transformed the roads, health sector and created jobs, among other things.

“All these feats make him a transformative leader,” El-Rufai said.
The governor said that Amaechi was constantly strategising for the party, making him an arrowhead in the lead-up to the governorship elections in Ekiti and Osun states.

El-Rufai said the former Rivers governor particularly contributed to efforts to increase the collection of the Permanent Voter Cards from 50 per cent to 90 per cent nationally, shortly before the general elections.
He said that Amaechi was worthy of being celebrated because he displayed courage in everything he did and cared about humanity.

“He is a devout Catholic who believes that every human being is entitled to his or her religious beliefs.

“What matters most to Amaechi are fairness, equity and justice and I am happy to call him my friend,’’ El-Rufa’i said.
[NAN]