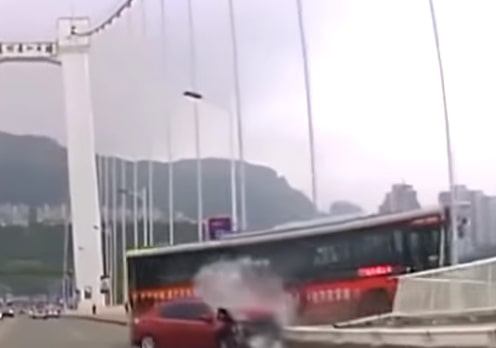 More details are now emerging on the sad story of a bus driver who drove into China’s Yangtze river last week Sunday.

According to eyewitnesses, the unidentified driver had an intense fight with a rude passenger who missed  her stop because the driver made a detour due to road maintenance.

According to the surveillance video released this morning, the driver became upset after the female passenger hit him on the head twice with her cell phone.

All of a sudden, the driver just swerved to the left and and drove the bus into the Yangtze River in Chongqing, China.

Everyone on board of the bus reportedly died on the spot.

13 bodies have been pulled out so far with 2 others still missing.

For those who said he lost control, please watch the video properly, you can see the angry driver probably on a revenge mission to teach the rude passenger the lesson of her life as he drove directly into the river without thinking about the lives of 13 other innocent passengers.

If he wanted to, he could have controlled the bus instead of driving on high speed directly into the river.

Proper anger management could have prevented this disaster.

May the souls of the innocent passengers rest in peace.