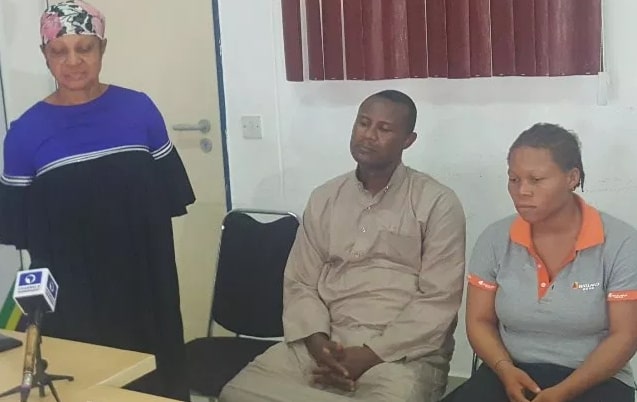 The NPF today paraded 3 suspected child traffickers who specialised in buying and selling of new born babies within and outside Nigeria.

He said on the 20th of July, 2018, the personnel of the Nigeria Police Force and the Nigerian Immigration Service while on patrol at the Idi-Iroko Border Post in Ogun State, intercepted the three suspects in possession of two new born babies and that the police on reasonable suspicion, interrogated them about the babies in their possession, but that they could not give satisfactory account of the babies.

“Consequently, the suspects, Emmanuel Chigozie Elesuwa and Chioma David admitted and confessed to the Police investigation team that they are members of a criminal gang that specialize in buying and selling of new born babies and children within and outside Nigeria and have been in operation for over ten (10) years. They further confessed that the two (2) new born babies found in their possession at Idi-Iroko Border was bought by them at the rate of N350,000 from one Chief Lilian Nma Achumba, owner of Nma Charity Home in Aba, Abia State now in Police custody. They also revealed that they were on their way to Benin Republic to sell the two new born babies to their cohorts and criminal business partners/syndicate for N700,000.00 each,” he said.

Adeniran explained that during interrogation and further investigation into the roles played by Achumba, it was discovered that the purpose of establishing the Orphanage Home was to harvest babies for sale and that she also operated other branches of the orphanage home in Port-harcourt and some other parts of the country.

“Thirty Five pregnant girls/women, six children and one new born baby were rescued at Nma Charity and Rehabilitation Centre Umunkpeyi, Isiala Ngwa South Local Government Area of Abia State belonging to the said Chief Lilian Nma Achumba. Twenty-eight pregnant girls/women and three children of the victims rescued have been officially handed over to the Ministry of Strategy and Social Development, Umuahia, Abia State and all have since been re-united with their families after receiving medical attention. The Principal suspect Chief Lilian Nma Achumba has admitted and confessed to her criminal roles in the case,” he said.

He added that investigation was being intensified to uncover other illegal orphanage branches being operated by the principal suspect, to rescue victims and arrest other members of the syndicate still at large to curb the menace and bring them all to justice, saying that they would all be arraigned in court on completion of investigation.

Adeniran aid the police implored members of the public to give useful and timely information on unscrupulous elements in the society hiding under the guise of orphanage rehabilitation homes to perpetrate these dastard and callous acts, while also enjoining parents and guidance to pay keen attention on the care of their wards and children especially the girl child.