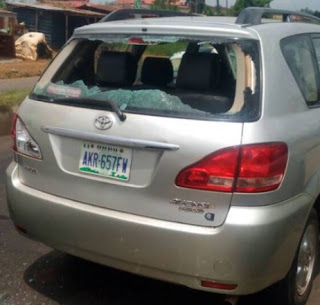 October 11, 2017 – Angry Drivers Declare War On Fayose Over Detention Of Colleague Who Attempts To Knock Him Down

Members of National Union of Road Transport Workers (NURTW) battled one another for several hours in Ado Ekiti yesterday.

Traffic, commercial and social activities were paralysed while business centres and schools were shut.

The commercial drivers moved from one location to another, attacking innocent residents and damaging vehicles.

The drivers, who started the attacks on Monday, were protesting the detention of their colleague, Ahmed Kolo, allegedly on the order of Governor Ayo Fayose.

Kolo was remanded in prison custody on September 27, following his arraignment at an Ado Ekiti Magistrates’ Court for allegedly attempting to knock Fayose down with his vehicle.

He was brought to court again on Monday but the court prolonged his remand.

This angered his colleagues, who claimed to have made representations to the governor on behalf of the detained driver.

The angry drivers declared war on Fayose, threatening unrest until Kolo is released.

The Ado-Ikere road was blocked for hours on Monday evening and vehicles.

The drivers blocked the road at Assumpta area, which caused traffic gridlock.

Residents on their way to work and schools turned back as suspected hoodlums blocked the dual carriageway at Akure Motor Park.

The drivers shot into the air and wielded weapons, such as cutlasses, axes, bottles and charms, as they hurled stones at riot policemen deployed to quell the crisis.

They placed fetish objects, broken bottles, big stones and other objects on the road.

Residents were in panic as gunshots were heard at Ijigbo, Ajilosun and Akure Motor Park.

Traders hurriedly closed their stalls and fled when they heard gunshots fired by the drivers.

Thick smoke from tyres used for bonfires billowed into the sky.

Those passing through the “war zone” at Akure Motor Park were made to raise their hands by riot policemen.

An NURTW member said one of its members was shot by the police at Ajilosun.

He did not reveal the name of the hospital the victim was taken to.

The driver said: “One of us was shot at Ajilosun, close to Fayose Market. There is no way we won’t avenge the killing. We are going to burn a police station, if that boy dies.”

Mrs. Olukolade said the drivers forcibly removed her car key and fled after the vehicle was vandalised.

According to her, the hoodlums damaged six vehicles in her presence.

She said: “At 11.30 am today (yesterday), I was coming from Akure and I saw a row of vehicles. We wanted to turn back but the policemen passed our vehicle. The next thing was that those boys just came and ordered us to stop.

“They ordered us to surrender the car key and, my son, who was driving, surrendered the key. They were pushing us, threatening to shoot us. There was a man they wanted to stab with a cutlass.

“In the course of the confusion, I began to run into a nearby house. I fell down and I was injured. About six vehicles, including mine, were damaged: their windscreens were smashed. The protesters went away with our keys.

“I reported the incident at Ologede Police Station on Ikere Road.”

Addressing reporters, Secretary to the State Government (SSG) Dr. Modupe Alade said the NURTW leadership had contacted the governor to resolve the crisis.

She said the detained driver was rude to the governor and refused to apologise.

This, the SSG said, was the reason he was arrested and taken to court for traffic offence.

Mrs. Alade said: “This driver drove recklessly against the convoy and he was arrested. Rather than apologise, he was rude to the governor. The governor asked him and his colleagues to apologise, but they refused.

“The governor, as a no-nonsense person, won’t tolerate any threat from anybody; not until he apologises, he won’t be released.”

Police spokesman Alberto Adeyemi, a Deputy Superintendent of Police (DSP), refuted the claim of the NURTW men that one of them was shot.

Adeyemi said: “Let me make it clear: nobody was shot by our men, and we have not even arrested anybody.

“We are dialoguing with the leadership of the drivers’ unions and we are sure the matter will be resolved soon.”

Continue Reading
You may also like...
Related Topics:angry, drivers, fayose