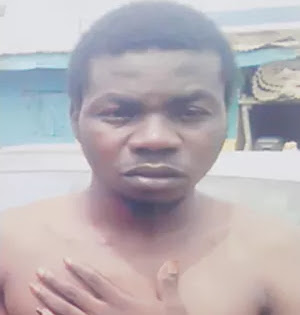 An angry youth who killed a cyclist, has told homicide detectives attached to the Ogun State Police Command that devil made him to commit murder.

The 23-year-old suspect, Sulaimon, was alleged to have killed the cyclist, Rafiu Gafar, at the Akute area of Ogun State.

It was learnt that since Rafiu’s death, his aged mother, wife and brothers had been inconsolable.
Nobody knew Rafiu was dead until a police sergeant presented his bloodied picture for identification.

His family members said they had been looking for Rafiu for four days before they went to police station to declare him missing.

“We didn’t know the whereabouts of Rafiu for four days. We and his friends had been searching for him. Whenever he goes out for his daily commercial bike riding work, he usually returns by 7p.m. It was on Monday that Inspector Otunba, working with Ajuwon Police Station, came to show us pictures of his dead body. He was said to have been hit on the head by a passenger on Thursday over a mere N150.”
Semiu recounted:

“He was killed by his passenger during an argument over N150 fare. My brother picked the suspect, Sulaimon, and his friend, Ibrahim Ahmed. When they got to their destination, they gave Rafiu N500 and he was supposed to give them N350. But he didn’t have change. When Ahmed realised that Rafiu had no money to give him change, he went into his house to collect money from his wife to give Rafiu. It was after Ahmed went into the house that Rafiu complained that he was being delayed.

He urged them to hurry; Sulaimon got angry over Rafiu’s comments. They started quarrelling; Sulaimon picked a wood, which was used to cover a septic tank nearby. He slammed it on Rafiu’s head and chin, forcing one of his teeth to remove.”

On impact of the wood, Rafiu fell to the ground, while Sulaimon walked away. The incident happened about 7p.m. but it was not until 10p.m. that someone noticed that Rafiu’s condition was bad and alerted the police.

Members of community were said to have quietly disappeared when they realised that Rafiu might die.

It was learnt that it was a team of policemen who finally came to take the dying Rafiu to Tamara Hospital on Akute-Ajuwon Road.

One of the doctors they met at the hospital, Dr. Awusa, was said to have told the police that Rafiu’s condition was poor. He noted that Rafiu was bleeding through his ear, nostrils and mouth.

The doctor reportedly said: “The bleeding was as a result of the gravity of the plywood that landed on his head and chin. Blood also blocked his breathing organs.”

Lamenting Rafiu’s death, Semiu said: “We’re devastated by the incident. You can see how demoralised our aged mother has been. Rafiu was loved by all. Imagine what his only son would feel like when he hears his father had been killed.”

Continue Reading
You may also like...
Related Topics:kill, okada, passenger