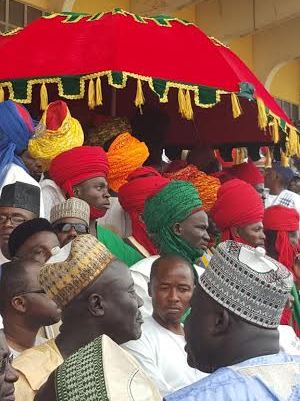 The inauguration of Governor Nasir El-Rufa’i of Kaduna State ended abruptly on Friday.

According to a report by NAN, El-Rufai could not review the parade mounted by the police as some youths pelted dignitaries with water sachets, stones and other objects in the pavilion.

This prompted security agents to fire tear gas into the crowd at the Murtala Square, Kaduna.

Some dignitaries in the pavilion included the Emir of Zazzau, Dr Shehu Idris, and other traditional rulers in the State.

The incident occurred when the new governor had concluded his address and was about to mount an open van to review the parade mounted by the police.

While the crowds were dispersed by the police, dignitaries remained seated, but the occasion ended abruptly without the governor reviewing the parade.

The Murtala Square was filled to capacity.