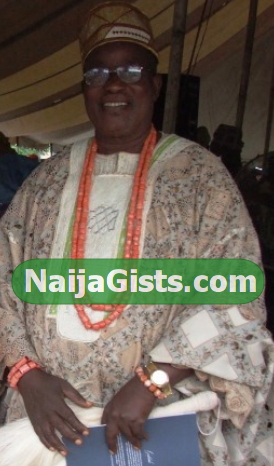 No fewer than five persons were shot yesterday in a fracas that broke out as angry youths stormed the palace of Apeju of Ilupeju-Ekiti and chased out the monarch, Oba Olaleye Oniyelu, for allegedly installing an unpopular person as a traditional chief.

Five houses were also razed by the irate youths, who pounced on the monarch for attempting to impose his own candidate as the Olugbosun (the third in hierarchy to the monarch and war chief) against popular wish of the people.

President of Ilupeju Ekiti Students Union, Mr. Tayo Fatile, was said to have also sustained serious injury during the fracas, as he was hit with the butt of a rifle during the scuffle.

The five persons shot, according to our sources, are now receiving treatment in an undisclosed hospital, while the monarch was said quickly rescued out of the palace by security guards to avoid being beaten and wounded.

Saturday Sun gathered that the monarch was to have conferred Mr. Israel Ojo with the Olugbosun chieftaincy title about six days ago. Some chiefs, in company of other dissatisfied youths, converged on the palace yesterday to install Mr. Aseperi, who was said to be the popular choice of the people in the sleepy town, situated in Oye Local Government Area of the state.

Public Relations Officer (PPRO) for the Ekiti State Command of the Nigeria Police, Mr. Victor Babayemi, confirmed the arrest of 22 persons by his men in connection with the crisis in the town.

Narrating the incident to journalists in Ado Ekiti, an eyewitness said the monarch’s preferred candidate for the war chief title, Mr. Ojo, was allegedly going to the palace amid pomp and pageantry, in company of his family members, to receive the title, when some youths blocked and prevented him from entering the palace. This led to a serious battle between his group and the youths fought each other with dangerous weapons and charms.

A source in the community told correspondent that some youths, who were not comfortable with the decision of the monarch, had mobilised themselves and waylaid the Oba’s choice, leading to fracas.

Investigations also revealed that but for the timely intervention of the police, the palace of the monarch, which was vandalised, would have been set ablaze by the angry mob.