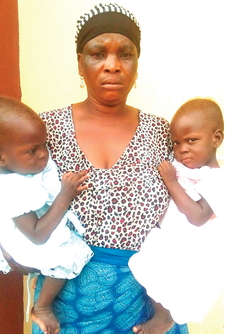 A married woman from Niger State, Mrs. Adiza Umoru has been arrested for using rented twins to beg on the streets of Lagos.

Her arrest came barely a week after three women were arrested by the officials of the state Ministry of Youth and Social Development for using rented babies to beg for alms.

Umoru, who was caught using twins for begging at Costain area of Lagos, claimed that her younger sister, Aminat, was the biological mother of the babies. However, according to the beggar, who hails from Niger State, she pays per time whenever she uses the twins to beg.