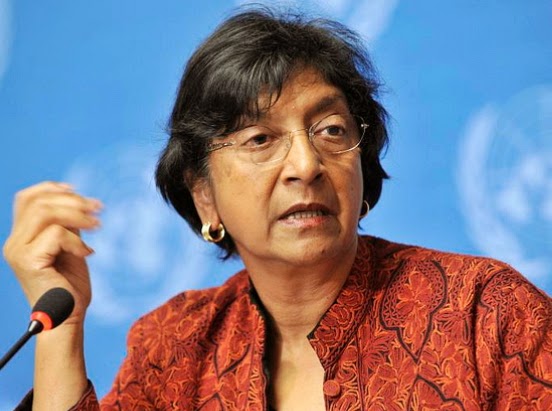 “I’m concerned with the implication of the recently-passed Same Sex Marriage Prohibition Act,” Pillay said during a meeting with Nigeria’s justice minister as part of her three-day official visit to Africa’s most populous nation.

“In addition to the violation of fundamental human rights enshrined in the ICCPR (International Covenant on Civil and Political Rights), it is a violation also of the African Charter and the Nigerian constitution itself,” she said.

Nigeria has been under fire internationally for banning gay marriage and alleged abuses while tackling Islamist insurgents in the north of the country.

Under the terms of the law — criticised by the EU, US and Amnesty International among others — anyone who enters into a same-sex marriage or civil union can be sentenced to 14 years in prison.

“It (the law) may have negative consequences for public health in Nigeria,” the UN chief said.

“It may deter LGBT persons from taking up HIV education, prevention treatment and care services and also hinder the ability of government as well as civil society and religious groups from implementing such services.

She called on authorities to observe a “moratorium on prosecution”.

The anti-gay law follows similar legislation in Uganda that was condemned by US President Barack Obama as “odious” and compared to apartheid by South African peace icon Archbishop Desmond Tutu.

She alleged that crimes committed by Boko Haram Islamists and security forces battling insurgents have “horrendous impact” on civilians.

Rights bodies and other groups have often accused security forces of human rights violations in their campaign to battle the insurgency which has claimed thousands of lives since 2009.

She said she would encourage Nigeria to take concrete steps to abolishing the death penalty by reducing the number of crimes punishable by it.

In response, Justice Minister Mohammed Bello Adoke said “the focus of the (anti-gay) Act is therefore discouragement of same-sex marriage which is a reflection of the overwhelming beliefs and cultural values of the Nigerian people”.

He claimed that a 2013 opinion poll showed that 92 percent of Nigerians rejected same-sex marriage.

He added that the constitution did not approve extra-judicial killing and “has zero tolerance for any form of cruelty or inhuman treatment”.

“While there have reports of extra-judicial killings, let me assure you that security officers that have been found culpable, irrespective of their position, are made to face the full weight of the law,” he said.

Her visit is the first by UN human rights chief to Nigeria.

Continue Reading
You may also like...
Related Topics:hiv, infection, nigeria