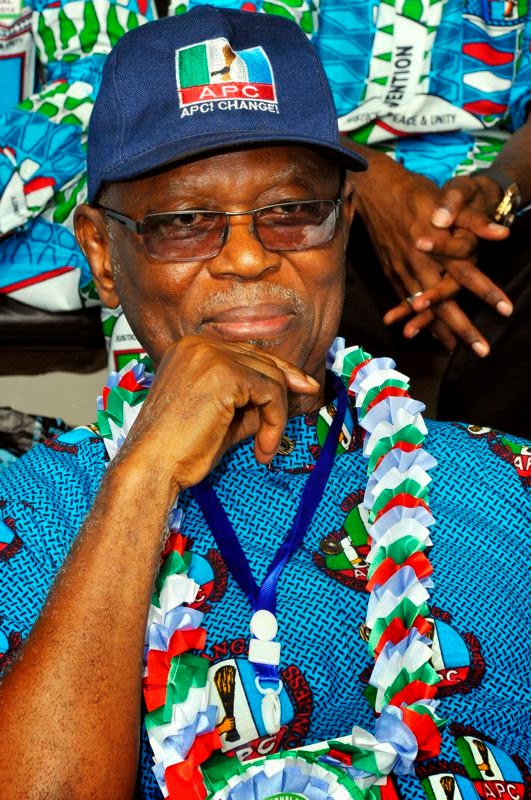 In the early hours of today, Monday the 12th of January 2015, some suspected hired killers invaded the residence of Chief John Oyegun, the National Chairman of the All Progressives Congress party, APC.

In a statement released by APC Public Secretary, Lai Mohammed, the suspected assassins , 2 burly men invaded Oyegun’s house around 1:30am and removed the window burglar bars to access his home and headed straight to his bedroom.

Police security was in the place when the attack happen but Oyegun was not at home at the time of the raid. His wife and children were deeply traumatised by the raid.

Here is a statement released by APC this morning:

”The facts of the raid as available so far point to a sinister motive. For example, only Chief Oyegun’s room was ransacked in the whole house. Common sense dictates that if the invaders were robbers, they would have ransacked the whole house in search of money and other valuables which they might have believed were in the residence

”The invaders, two burly men, removed the window burglar bars to gain access to the residence from the back, and then made straight for the bedroom of our National Chairman. Police security was in place at the residence when the incident happened,” APC said.

The party said it was worth noting that the angry rhetoric and vitriolic personality attacks that had been directed at the opposition by the top leadership of the ruling PDP and their spokesmen had heightened tension and put the lives of opposition politicians at risk, ahead of the forthcoming elections.

APC wondered what would have happened to Oyegun if he had been at home at the time of the attack.

PDP has lost its sense of value. The party has no good thing to offer Nigerians again so they have resorted to using force to remain in power.