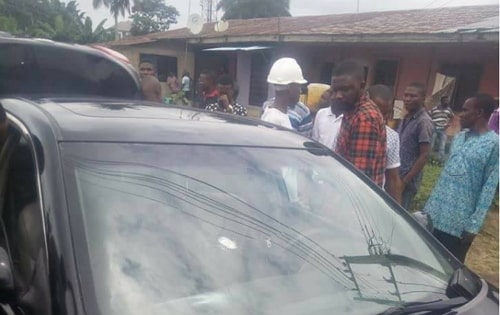 A chieftain of the All Progressives Congress (APC), Mr. Joseph Chuwak Dalyop escaped assassination on Thursday night after the declaration of Plateau North senatorial election result.

Dalyop was driving with his wife along Domkat Bali Road, Jos when gunmen shot directly into their car and hit his wife in the head.

The bullet missed Dalyop who was said to have been the prime target but got the wife who is currently hospitalised in an undisclosed hospital in the state.

The APC, Plateau State chapter has condemned the assassination attempt and said it was a calculated to incite APC supporters.

The Media and Publicity Committee of the Campaign Council Plateau State in a statement signed by Jonathan Ishaku, urged APC supporters to remain calm and focus towards winning the governorship election in the state.

He said: “Last night, a failed assassination attempt was made on a popular artist and APC chieftain, Mr. Joseph Chuwak Dalyop (popularly called DJ Tassa), while driving along with his wife on Domkat Bali Road, Jos.

“The bullet narrowly missed him but not his wife who is now lying critically ill in an undisclosed hospital with a shot to the head. The attempt was made to incite APC partisans to violence but owing to our penchant for peace, we were able to calm frayed nerves.”

The APC commended the Gbong Gwom Jos and Chairman Plateau State Council of Chiefs and Emirs, Da. Jacob Gyang Buba for preaching peace during the period the election result for Plateau North was yet to be announced.

“The APC Campaign Council deeply appreciates the public plea for peace and restraint by the highly-revered royal father, His Majesty the Gbong Gwom Jos and Chairman, Plateau State Council of Chiefs and Emirs, Da Jacob Gyang Buba, issued in view of the tension arising over the delay in the announcement of results of the National Assembly elections conducted on the February 23, 2019.

“The council wholly identifies with the clarion call by His Majesty and enjoins every peace-loving resident of the state to always toe the path of peace and orderly conduct and allow the Independent National Electoral Commission (INEC) to carry out its duties.”

He noted that the security establishment should hold PDP culpable should there be a total breakdown of peace in the state.

“There is clearly a link between their reckless rhetoric and the failed assassination attempt on the APC chieftain. This is a new dimension in the annals of Plateau State politics,” he said.