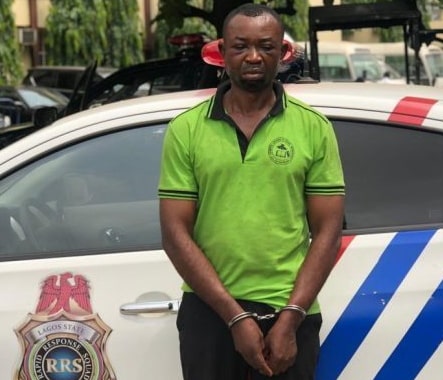 Members of the RRS have arrested the leader of a four-man fraud syndicate, Osuji Chibuzor, 42, for allegedly swindling a 34-year-old woman of N165,000.

It was learnt that the syndicate was operating in Ikeja, Ojota, Ojodu Berger, Ogba, College Road and Agege, while their offices were located at 8 Afolabi Street, Iju Shaga and 7 Salami Street, Oko-Oba, Agege.

Chibuzor’s role, according to the RRS, was to deceive the victims with fake prophecies after they might have been lured into the offices.

The suspect stated that his gang members used to offer their victims fake dollar notes in order to ensnare them.

He said other members of his gang were Frank, Stella and Emeka, adding that they usually drive to Ikeja, Ojota and Agege areas every day to lure unsuspecting members of the public to their two offices.

According to him, their victims are then tricked into the dollar-making scam.

Chibuzor reportedly stated that after bringing the victims to the offices, the other gang members would then invite him as a pastor to pray for the victims.

He said it was in the process of praying for the victims that he would request money for anointing oil, chemicals for the washing of the money and other charges.

The suspect stated that it was frustration that made him to join the gang three years ago.

He was quoted as saying;

“Although there are many other fraud gangs in Lagos independent of ours, it was only four of us who formed our gang. We operate in Agege, Ogba, College Road, Ojodu Berger, Ojota, Ikeja, Alausa and Ifako-Ijaiye.

“What I collected from the lady was N120,000. I know that my colleagues withdrew N45,000 from her account using her ATM card. I am ready to pay all the money back.”

The woman, who asked not to be named, said she boarded a taxi in Ojota to Ojodu Berger, adding that she was in Oregun when the driver decided to pick up another passenger.

She said she did not know how she got to Iju instead of Ojodu Berger.

She added that members of the gang made her swear to an oath that she would not tell anybody about what transpired between them.

The victim was quoted to have said,

“We were still in Oregun when the driver picked up another passenger. It was at this point that they started playing tricks on me.

“I ended up in their office in Iju, where they collected all the money on me, including the one in my account. They made me swear to an oath never to inform anyone. Thereafter, Chibuzor requested that I should get another N60,000 to complete the ritual.

“After collecting N165,000, they still won’t let me rest. I borrowed N60,000, being the balance of what they needed. I was on the way to hand it over to them when I regained my consciousness.

“Luckily for me, with the assistance of a patrol team of the RRS, I was able to lure him (Chibuzor) out and got him arrested.”