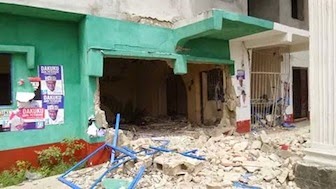 Old habits of political intolerance predictably from Abam Ama, Okrika in Okrika local Government area of Rivers state don’t die hard, as unknown persons in the early hours of the morning of Sunday January 11, 2015, threw dynamite into the party secretariat of the All Progressives Congress (APC).

The explosion which occurred at around 3:14 a.m., according to APC Chairman in Okrika, Christian Asifamaka, destroyed the secretariat, bringing down the walls.

The damage was quite extensive with the Chairman’s office being the worst hit.

“The All Progressives Congress in Okrika views this latest attack as a deliberate provocation by our opponents, the People’s Democratic Party to draw the APC into a battle that would destabilize our beloved local government area. This is unfortunate and the APC in Okrika would not allow Okrika to become a hotbed of crises as the PDP would wish.”

According to Asifamaka “We are Okrika people and we know what political crises has cost our people in the past. Our local government area has always been the worst hit in times of politics. Our young children are the ones they use as canon fodder. We know this and as a party have resolved to tow only the path of peace in the interest of our land and our children.”

The party appealed to the wife of President Goodluck Jonathan, Patience, who is from Okrika that the land Okrika has never spared any person who brings trouble to the land.

“We beg our daughter to remember that the land of Okrika has never spared any Okrika person who brings trouble to the land or destroys it. We beg her to please call her people in the PDP to order because Kirikese is bigger than anyone of us and we should not destroy it.”

The statement further alleged that PDP’s resort to violence is because they know that Okrika people have rejected them because of their inability to attract any meaningful development to the LGA. “Till now the East/West road through which we access our community has been left abandoned by a PDP led Federal government while Governor Chibuike Amaechi who is not an Okrika man built a Ring Road in Okrika and also rebuilt a portion of the Federal Government road that links the LGA to the Port Harcourt refinery.”

The APC Chairman alleged that PDP Federal Government denied Okrika people potable water, refusing the Rivers State Government from providing water to Okrika people despite proof that the level of benzene in the water in Okrika is beyond acceptable levels.

“We can list so many injustices against the people of Okrika by a federal government that is supposed to be sympathetic towards us, yet the APC has continued to tow the path of peace and unity and would continue to do so because we are Okrika people and we love our land.

The APC chairman in Okrika local Government cautioned Okrika people in PDP to remember that the land of Okrika has been known to defend itself and its people against aggression and that any Okrika person who brings crises to the land answers for it because Politics is not a do or die affair.

“Let us each hold our political views and try to persuade our people in a civilized manner. This barbaric acts must stop. Wakrike deserves better,” Asifamaka warned.