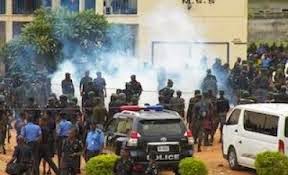 6 people including the VC of Edo state chapter of the APC party, Usman Mogaji, have dragged the Nigerian Army, Chief Raymond Dokpesi and two others to the Federal High Court in Benin over alleged harassment, detention, denial of fundamental human rights, among others, by some unidentified soldiers, allegedly on the orders of Dokpesi during last Saturday’s presidential and national assembly elections in Etsako West local government area of the state.

Also joined in the suit as respondents are the Chief of Army Staff and the Commandant, Nigerian Army School of Electrical and Mechanical Engineering, Brigadier-General Augustine Odidi.

Other Applicants include Aliyu Mogaji, Tony Braimah, Samuel Nandik and Everest Igbolekwe who are wards, siblings and employees of Mogaji.

In the case with suit number FHC/B/CS/66/15, signed by Counsel to the Applicant, Hilary Oshomah, Mogaji wants a perpetual injunction against the respondents from “Further arresting, detaining, intimidating, harassing, kidnapping, abducting or in any manner infringing on the fundamental rights of the respective Applicants and members of 1st‎ Applicant’s household connecting, concerning, pertaining, relating from the masterminding and instigating of the 4th Respondent.”

The applicants are demanding for N500 million damage cost from the 1st respondent and N20 million against the “3rd and 4th Respondents (Odidi and Dokpesi) jointly and severally in favour of each of 2nd to 5th Respondents for wrongful, illegal, unlawful kidnapping, abduction, foreful torture, degrading and inhuman treatment, detention, hostage, captivity and false imprisonment of the 2nd‎ to 5th applicants.”

They are also demanding a public apology in two national newspapers over their harassment, beating and detention by soldiers allegedly on the orders of Dokpesi.

It would be recalled there was anxiety among family members and friends of Mogaji on Sunday whose whereabouts they said they don’t know and that they are being harassed by soldiers from the Nigerian Army of School of Electrical and Mechanical Engineering in Auchi who they said arrested his son, cousin, cook and security-man and have held them incommunicado.

Oshomah, Counsel to Mogaji, who was in Benin City to formally report the incident at the state Command of the Nigerian Police told journalists that the soldiers were acting on instructions from their Commandant and a top politician who is not from the area but came with soldiers on election day to supervise apparent disruption of the election process.

According to him, Mogaji’s offence is that he was the one who mobilised voters to resist the attempt by Dokpesi using the soldiers to disrupt the election process on Saturday.