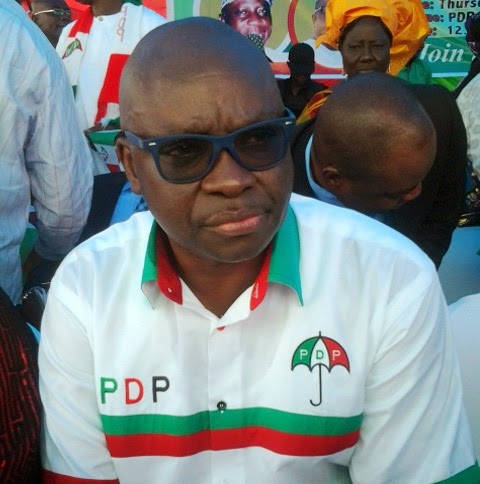 Ekiti State Governor, Mr. Ayo Fayose, has accused the All Progressives Congress (APC) of deliberately planning mayhem in the state to paint him black as a prelude to its dangerous sinister motive.

The governor, who spoke through his Chief Press Secretary, Mr. Idowu Adelusi, in a statement in Ado Ekiti yesterday, maintained that APC actions on Wednesday was deliberately planned to destabilise the state after the election of General Muhammadu Buhari in the just concluded election.

Fayose stressed that part of the plan was to bring hired hoodlums to destabilise the peace of the state and later run to the media, blaming it on the governor.

“We have been informed of allegations made by the APC that some people in a Hilux vehicle were sent by the Ekiti State Governor, Ayo Fayose, to attack the APC members in the state.

“Such allegation should be disregarded by every reasonable human being, because the governor did not send anybody and have never done such a thing in the past.

“The APC in its usual character has piled up strategies and more than 20 lies of various degrees which it had planned to execute on daily basis to cause commotion in the state in anticipation of the emergence of General Buhari as the president of Nigeria.

“One of such lies is this allegation of attack, which in actual sense APC planned and executed to make it look as if the party’s members were attacked by outsiders.”

Continue Reading
You may also like...
Related Topics:attack, ekiti, fayose