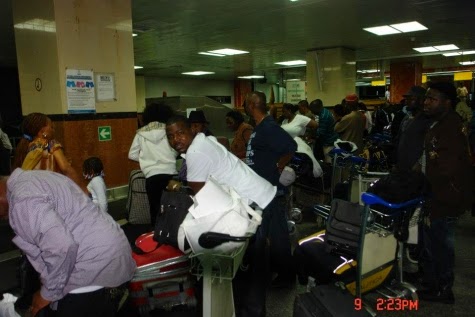 The News Agency of Nigeria (NAN) airport correspondent reports that the intending travelers, numbering no fewer than 100 were stranded at the airport since April 17.

The intending travelers resorted to violent protests, invading the tarmac of the airport and disrupting a scheduled Lagos-Accra flight of Arik Air early on Saturday.

However, the Spokesman of Arik Air, Mr Ola Adebanji, told reporters that the issue had been resolved and that the Accra-bound aircraft later made the trip.

Adebanji explained that the U.S. bound passengers could not depart as scheduled, due to malfunctioning of the browser, fueling the aircraft.

He assured that the U.S bound passengers would make their trip immediately the problem was fixed.

One of the stranded intending travelers, who identified herself simply as Tolu lamented her inability to make the trip on schedule.

She said that the management of Arik Air had kept them in the dark on the inability of the plane to depart on schedule.

Tolu said that the intending passengers were abandoned, instead of being lodged in a hotel and that they had no means to get in touch with their families.

She claimed that the abandoned travelers were only given snacks and a bottle of water since Friday morning when the flight was cancelled.

Another passenger who also declined to mention his name described the handling of the intending passengers by the airline as poor.

According to him, Arik Air has persistently abandoned intending passengers without tangible excuses while “the industry regulator, the Nigerian Civil Aviation Authority (NCAA) often looks the other way’’.

He, however, vowed to challenge the latest development in court.

When contacted, the Director of Consumer Protection, of the NCAA, Alhaji Abdullahi Adamu, said that the duty of NCAA on passenger processing stopped at the boarding gate where Aviation Security takes over from.