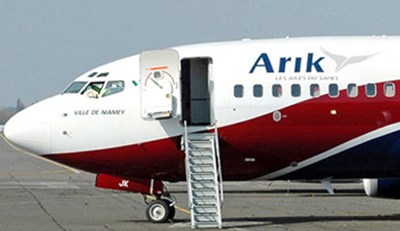 May 21st, 2013 – Arik Air Female Cabin Crew Members Arrested In London With Cocaine Worth Of N180m

Arik Air staff Temitayo Olubunmi Daramola was found in possession of 6kg of cocaine while Delita Abibimgbi was found with 60 packets of cigarettes, NDLEA said in a statement.

“Eight out of the ten crew members that travelled with the flight have been cleared while the remaining two are still being held in London,” NDLEA said.

Chairman and Chief Executive of NDLEA, Ahmadu Giade, has ordered the investigation.

“We have received report of the arrest and I have ordered a full scale investigation of the incident. Anyone found wanting shall be brought to book as no effort shall be spared in protecting the image of our country,” Giade said.

On 8 August, 2007, officials of the NDLEA arrested a Virgin Atlantic crew member with drugs in a London bound flight. The crew member,  Mohammed Ibrahim Wudil, was caught at the Lagos airport with 1.743kg of cocaine.

The drug which was concealed in a black polythene bag inside a hand luggage was found in the flight compartment.