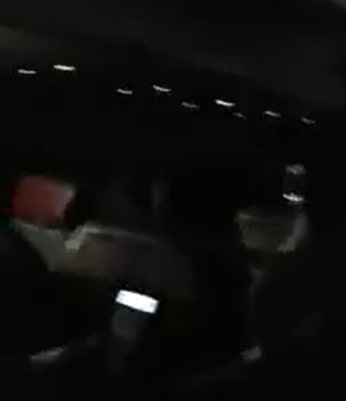 The panicky passengers were heard speaking in tongues and engaging in serious prayers during the mid-air crisis.

The control tower said the plane went off radar more than 3 times.

Here is the testimony of one of the lucky passengers.

No place for argument! We left port Harcourt at about 22:00, experienced some turbulence while descending into Lagos, the pilot said there was storm passing through WA this period, and that it was a rare occurrence. At about 23:30, he made the first attempt to land, I sat by the window so I could see a bit more, the plane was close to touching the ground, when a sudden wind came from the side and took over the plane, pilot aborted the landing, with the plane shaking from side to side due to the wind force, and the engines crying from very high RPM, he made his way back up. People shouted, cried, prayed, and there I was forming cool guy.

My colleague siting behind said “Ibimina, that was a close call” Mr cool guy was there quite saying we will land soon, soon turned into over 2 hours of the pilot struggling to control the plane, people passing out, prayers turning into receive my soul…

But just before the failed first attempt of five attempts, the Lord asked me to pray because it will be worse, I felt it was my many documentaries on “moments before disaster” getting the better of me. For more than two hours, we died many deaths, I thought about my wife and my son, as tears dripped down my face(I just started crying again).

A thought came to me to say my final prayers, the pilot was finding it difficult to steady the plane for over an hour, then I asked myself why did He ask me to pray, if I will still die, so I refused to pray any prayer of “receive my soul” I began to shout Tamunodein!!!!(the peace of God) which happens to be my son’s name, I said the storms obeyed You, they will obey you again today, I refuse to die like this!

I speak your peace and declare that You provide a window for this plane to land, by the sixth attempt HE gave us a window and we landed at about 01:02am today. The air hostess at some point started shouting, “people, call upon God, we will survive, raise your praises God is able to do it”

I can’t write all that happened, but when we got off the plane, someone from the control room met us and said we went off the radar more than three times. My colleague went to the cockpit to thank the pilot, and he told him, he had flown over 50 planes and has never seen this before.

They gathered today to end us, but the Lord sent HIS angels, and Rebuked them.