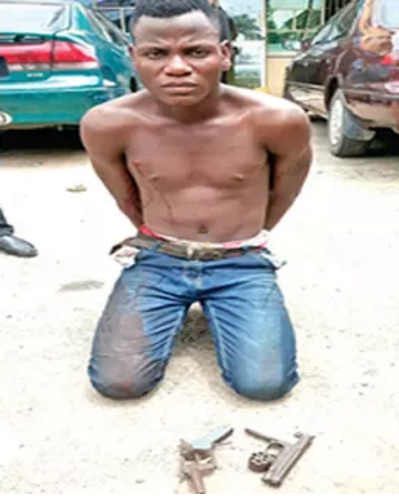 A 4-man robbery gang invaded Idimu area of Lagos yesterday and killed two persons. The suspected robbers shot dead a police inspector and a civilian at Okunola Street, Idimu, on the outskirts of Lagos metropolis.

The yet-to-be named inspector was shot while he was withdrawing money from an Automated Teller Machine (ATM) at GTB bank. The robbers, who stormed the area about 11a.m., had earlier attacked a bank customer and robbed him of a huge sum of money which he had withdrawn inside the banking hall.

The gunmen, who wielded two guns, went for the customer who was on his way out of the bank. The suspects had successfully robbed the man and were fleeing when they saw the inspector using the ATM and shot him in the head.

Onlookers rushed the inspector to a hospital where doctors confirmed him dead. Meanwhile, policemen stationed at the bank called for reinforcement. Men of the Rapid Response Squad (RRS) and Mobile policemen deployed in the area went after the fleeing robbers and caught up with them.

In the ensuing gun battle, the police shot and killed two of the robbers, arrested a suspect identified as Gaffar Ismail while the remaining one escaped. The police recovered motorcycles, as well as the two guns used for the operation from the suspects.

A police source said the robbers had an insider source in the bank. “There is someone in the bank who usually informs them when a customer comes to collect huge money. The way they came, it was clear that they had information and knew exactly who to target.

“The suspect that was arrested has earlier killed a policeman and he was the one who shot the inspector,” the source said.