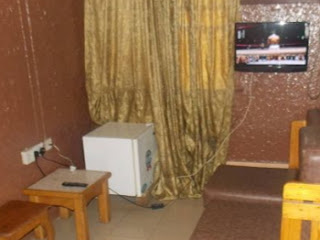 3 armed robbers who recently carried out a deadly attack in Oshodi have been arrested.

The arms and ammunition which they used to attack people at the popular AB hotel in Lagos have been recovered. It was gathered that the incident happened on April 8 2018, at the popular hotel on Akinsoji Street, Shogunle in Oshodi, Lagos.

The suspects were Damilola Oluwole, 27, Seyi Adebayo and Olusupo Jeremiah. Items recovered from them were locally made pistol, 5 live ammunition and expended cartridges.

It was gathered that the suspects stormed the hotel, shot sporadically, stole some of the customers’ valuables and escaped. Though no lives were reportedly lost, but some people sustained injuries as they scampered to save their lives.

The suspects were paraded alongside other criminals arrested across the State by the Lagos Commissioner of Police, Mr. Imohimi Edgal at the State Command, Ikeja, Lagos.

The police boss said that the management of the hotel made complaints about what happened and the operatives of Federal State Anti-Robbers Squad, FSARS were dispatched to fish out the robbers. He said that the following day, being 8th April, 2018, one of the suspects Damilola Oluwole was arrested and he confessed which led to the arrest of the two other suspects, Mr. Adebayo and Jeremiah at their hide out.

Edgal said that the suspects took the police to their hide out at Akala area of Mushin, Lagos, where the arms were recovered and brought to the Command as exhibits.

He added  that the suspects will be charged to court after the conclusion of the investigations, while efforts were being made to arrest other suspects now at large.