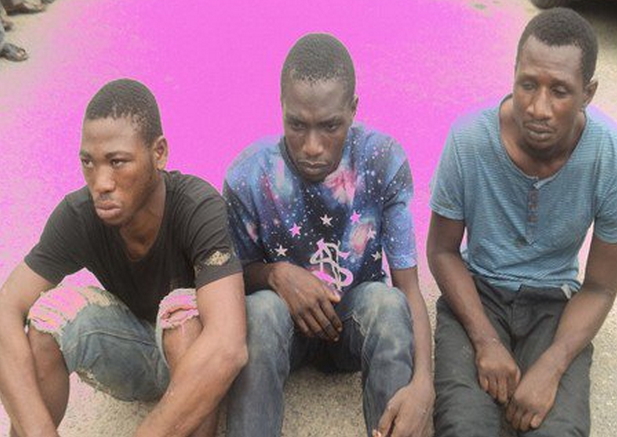 An armed robbery suspect, Adebayo Dipo, yesterday said his gang got its weapons from a Peoples Democratic Party (PDP) chieftain in Lagos during the last elections.

Dipo, 30, alongside Alade Ogbulu 30 and Kofi Olumede (Ghanian), 21, were paraded by the police over the series of attacks and killings on Lagos Island.

They said they were hired and paid N200,000 by politicians to foment trouble during the elections.

One pump action rifle, a single barrel rifle and four rounds of ammunition were said to have been recovered from them. The suspects said the arms and a FEDECO bus were given to them by the PDP chieftain.

The suspects, who belong to different cult groups, also reportedly had two cutlasses and an axe in their possession.

They told reporters that they were involved in many cult wars in Ajah, Tafawa Balewa Square and other areas in the state.

But Dipo, popularly known as SARS denied that his gang killed five persons after at a particular rally on Island.

He said: “It was only Ashake that we killed. The others died during a fight with our gang. Nobody shot at them. We also lost some of our members during the clashes. I am a member of Black Axe Confraternity and I dropped out of the university due to lack of finance.

“We were usually given N200,000 after each rally, which we shared among ourselves, no matter how large the crowd is.

“The PDP chieftain (names withheld), gave us guns and FEDECO bus during campaign. I am a site agent. My nickname is SARS. We killed one Ashake on Saturday but four others died on Sunday, making five.”

Kofi said about six persons were killed by the Abija Confraternity, which he belongs to.

“I belong to the Abija Group. About six persons have been killed in separate clashes. I am a political thug to the PDP.

“On the day when the PDP held its rally at the TBS, my group shot dead one person. That was also the day Jonathan came to Lagos.

“After the rally, some of our boys killed Otun who brought his boys to engage us in a fight. It was one Layi, our gang member, who shot him. The following day, the APC faction came to Enuowa area to engage us in a reprisal attack; we also killed four of their members. It was the APC thugs that launched the first attack
“We are loyal to Abija, he was our leader and he brought all these guns (pointing to the recovered weapons). Abija had so many boys- too many to count. I was a meat pie seller before I joined the group in Lagos Island,” he said.

Police Commissioner Kayode Aderanti said the suspects were arrested following raid of all dark spots in the state, because of the incessant skirmishes on the Island and its environs.