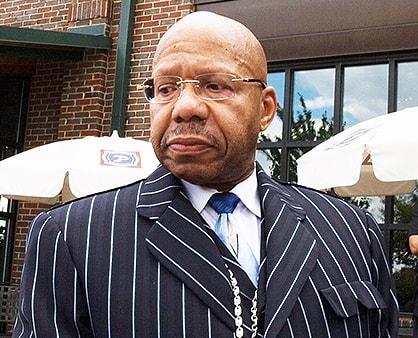 Late Aretha Franklin family members are not happy with Atlanta Pastor, Rev Jasper Williams over a controversial eulogy he gave during the funeral service of the Queen of Soul.

While speaking on behalf of the family, the singer’s nephew, Vaughan Franklin said Rev Jasper’s eulogy was offensive.

Here is what she told the Detroit Press on Monday.

“I want to speak on behalf of the Franklin family as it relates to the comments that Rev. Jasper Williams, Jr. made on Friday during my aunt’s Celebration of Life service on Friday, August 31. We found the comments to be offensive and distasteful.

Rev. Jasper Williams spent more than 50 minutes speaking and at no time did he properly eulogize her.

My aunt did not ask Rev. Jasper Williams, Jr. to eulogize her before she passed away because dying is a topic that she never discussed with anyone.

Our family asked Rev. Jasper Williams, Jr. to perform the eulogy because he eulogized our grandfather (Rev. C. L. Franklin), my aunt (Erma Franklin) and my uncle (Cecil Franklin). However, there were several people that my aunt admired that would have been outstanding individuals to deliver her eulogy including Dr. William J. Barber, Rev. Al Sharpton, Dr. Michael Eric Dyson, Rev. James Holley and Pastor E.L. Branch.

We feel that Rev. Jasper Williams, Jr. used this platform to push his negative agenda, which as a family, we do not agree with. “

During his eulogy, Williams received a lot of backlash after claiming that a black woman cannot raise a black boy to be a man. Many thought that he was being disrespectful to the singer who was a single mother of four.

Williams was also accused of minimizing the Black Lives Matter movement due to black-on-black crime when he said,

“Black lives must not matter until black people start respecting black lives and stop killing ourselves.”

Watch his eulogy below!

Juliet Ibrahim: I Was Bullied For Having K Legs
Police Group Calls For Boycott Of Nike Products Over Kaepernick’s Just Do It Nike Campaign