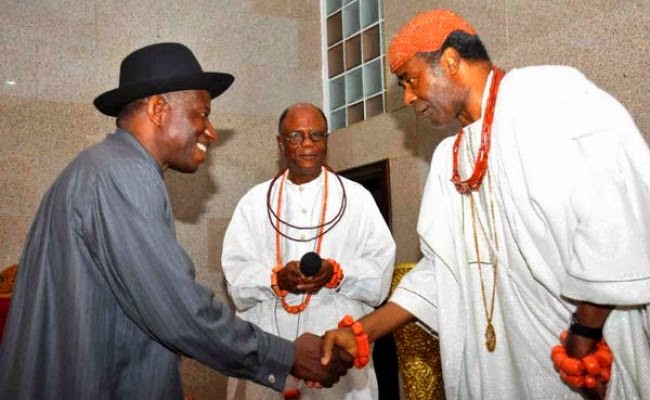 The traditional ruler was also said to have told the President that his people even got a better deal from former President Olusegun Obasanjo.

“He told the President that as the paramount monarch of the Itsekiri people, he could advise them on how to vote. Nevertheless, he said it was not possible to go back to tell his people to vote for him considering the raw deal they have received from him.

“The Ogiame particularly lamented the manner the President aborted the groundbreaking ceremony of the gas project, which was the only benefit his people would have received during his entire six years.”

Apparently worried by the tone of the monarch, President Jonathan was said to have requested for a private meeting with Tompolo and the Akulagba – two of the key players in the controversy over ownership of the lands in the area.

It was gathered that a pre-meeting between the duo was almost called off due to hot exchange of words between the Ijaw and Itsekiri leaders, who bickered over the ownership of the contentious site of the project.

“Although Tompolo was willing to concede that the 2,800 hectares site of the gas project is owned exclusively by Itsekiri, he wanted an assurance from Akulagba that the site of the deep sea port would be conceded to the Ijaws of Gbaramatu.

“Ayiri insisted that all the land, including where some Gbaramatu communities are located is owned by the Itsekiri, insisting that he would not be cowed by threat of war or violence to concede his kinsmen’s property for peace.”

In spite of the latest development, it was gathered that Emami is planning to go to court if the deep sea port is conceded to the Ijaws as it is being proposed by the President and the Delta State Government.

“From what we have gathered, he has concluded plans to challenge the Ijaw’s claim to the land, particularly Ikpokpo and other communities alleged annexed by the Ijaws during the Ijaw/Itsekiri crisis.”