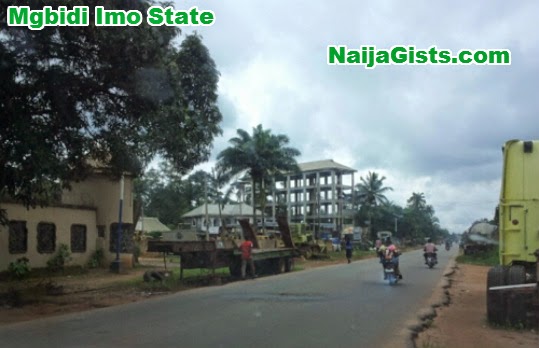 A father of six children, Mr. James Nduka, was on Friday shot dead by a trigger-happy policeman in Imo State. The incident occurred when the late Nduka saw po­licemen from Mgbidi Police Di­vision of the Imo State Police Command manhandling his wife and he sought to know why they were treating his wife that way.

Narrating the ugly incident that led to the untimely death of her husband, the distraught wife of the deceased told Sunday Sun: “On that Friday evening, one of my relations brought an invita­tion card for my husband but my husband was not at home. After seeing him off with one of our children, I was going back to the house when I started hearing gunshots. I also noticed that people were running away because of the gunshots. But as I was talking to my child who was frightened by the sound of the gunshots, a policeman confront­ed me, asking me why I had told the people to run away. I said that I only spoke with my child who was frightened by the gunshots.”

Continuing, she said: “Instead the policeman started beating me. Then his other colleagues joined him in beating me and dragged me to their patrol van where I was tortured to the extent that I defecated on myself. I think somebody called my husband and when he arrived at the scene and saw me lying face down in the police van, he inquired from the policemen what offense his wife committed that she should be so treated. He added that if I had committed an offence that the right thing was that I should be taken to the station. But one of the policemen descended on him, knocked him down and started shooting at him.

“Initially I did not know that my husband had been shot be­cause I was still in the van lying face down but it was when we got to Oguta Police Station that one of the police officers asked the Divisional Police Officer of Mgbidi, who led the police team if I was the wife of James Nduka who was shot. That was when I realized that the police had killed my husband.”

Also, somebody who wit­nessed the incident and spoke with Sunday Sun on condition of anonymity corroborated what Mrs. Nduka said, adding that the late Nduka was not a criminal.

His words: “His only of­fence was asking the police of­ficers what the wife had done to warrant her being beaten up, and before you knew it, the po­liceman pushed him down and shot him dead. This is terrible because even if he had com­mitted any crime, the best thing for the police to do was to arrest him. By killing him, they have rendered hapless mother of six children, a sudden widow for no just cause. It is high time that the police authorities started doing thorough psychiatric test before they enlist people into the Police because what happened last Fri­day is a real case of madness.”

When contacted, the Imo State Police Public Relations Officer, Mr Andrew Enwerem, a Deputy Superintendent of Po­lice, confirmed the incident and said that the late Nduka died as a result of an accidental discharge.

But he disclosed that the police officer who shot and killed late Nduka had been arrested and was in the custody of the police. He assured that the matter was being investigated.