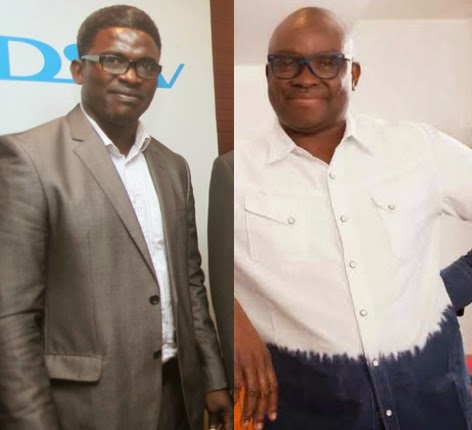 March 25, 2015 – “Ayo Fayose Is Rude & Proud, He Is A Disgrace To Our Family”-Ekiti Governor’s Elder Brother, Segun Laments

Ekiti State Governor Ayo Fayose’s elder brother, a UK-based accountant, Segun Fayose on Sunday told The Nation that the governor is an embarrassment to his family.

During the interview conducted in Ibadan, Segun said he has cautioned his younger brother on several occasion over his remarks on Obasanjo and Buhari but he has refused to listen.

“It is a pity Nigerians are celebrating criminals. I am angry with Nigerians for electing somebody like Ayodele as governor. My children cannot come to Nigeria because of the terrible situation of our country.

“I don’t have a relationship with any of our leaders because of their criminality and anybody who says I collected money from the opposition should step forward to challenge me. Ekiti and Nigeria are bigger than Fayose’s name and both names should be protected. I don’t want anything from anybody, but Ayo should stop insulting and abusing my father’s name.

“As a result of Fayose’s attitude, many people believe the Fayose family is rude but it is far from the truth. I have spoken to him many times, but he refused to listen. Buhari and Obasanjo are old enough to be his father and I don’t know why he should be insulting them.

“I am always sad with the situation of this country. Ayo’s arrogance is one of the reasons I said people should not vote for him prior to the Ekiti governorship election. If all I am saying is not true, my six children should die and I should end up in shame. Most of us abroad are not happy with the situation of Nigeria. We are sad.

“When people call me from Ekiti to complain about Ayo, I tell them to forgive the family. People should not see Ayo as an ambassador of our family.”