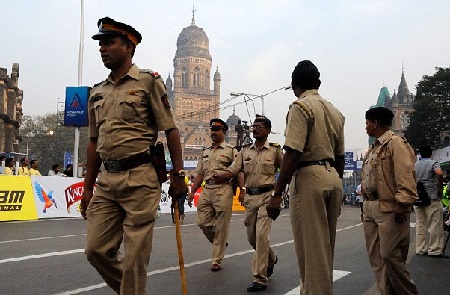 April 20, 2017 – Shock As Indian Man Beheads Elder Brother In Public For Making Jest Of Him

Suresh Kumar, a  40-year-old Indian citizen dragged his brother, Chinturam out of bed and into a village square before tying him to a pole and chopping him to pieces because he was fed up of being teased.

Villagers in Daundi Lohara, Chhattisgarh, were horrified he tied Chinturam up and hacked away at him.

First he lopped off his elder brother’s hands before beheading him after he told the gathered crowd he would kill them if they tried to intervene in the frightening incident in Balod district.

Eventually, Suresh calmed down, and he walked into a police station with the blood-drenched murder weapon and handed himself in, according to Times of India.

It has emerged his brother Chinturam would playfully mock his younger brother by singing in a high-pitched tone.

Fights between the two had become a regular thing and when they were sharing the same room to sleep in and the singing started again, Suresh snapped.

He hopped out of bed and started beating Chinturam, which was a daily occurrence according to their wives.

In an attempt to scare off his younger brother, the victim grabbed an axe, but it quickly turned sour when he was overpowered.

Suresh frog marched his brother down to the local square, which was bustling with people. Chinturam was tied up to a pole and his limbs and head were chopped from his body. In the frenzies attack, the killer lost a finger of his own and cut his head.

Suresh Kumar has been charged with murder.