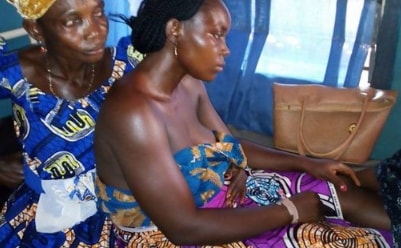 Baby Stolen After Birth In Kogi Hospital: Nurse Arrested For Selling Newborn Baby To Kidnapper After Telling Mother To Face The Wall

There was confusion in Ayingba, Dekina local government area of Kogi State recently when a one-day old baby was reportedly stolen from a private hospital.

An eyewitness account said the abduction of the baby may have been carried out by a man who purportedly dressed as a woman, allegedly arriving at the hospital covering his head with a black hijab – a muslim head veil.

The baby was reportedly stolen a few hours after being delivered, with an on-duty staff suspected to have aided the kidnapper.

Narrating her ordeal to our correspondent, the mother of the stolen baby, Mrs Laruba Drisu, said:

“While I was labouring for delivery, my husband rushed me to the hospital, where it was confirmed that it was time for me to give birth. Then my husband went home to bring some of our belongings needed for my delivery. But before he returned I had already given birth.”

She said after delivery clothing belonging to the proprietress of the maternity hospital was used to wrap her baby.

“When my husband came back with his mother to the hospital, he was very happy to see our new born baby. However, after delivery, she noticed that she was bleeding excessively,” she said.

According to her, the proprietress checked on her condition and gave her an injection.

She said the proprietress, after assisting in the delivery, needed to clean up, instructing the nurse to look after the baby and the mother, who was still weak.

“So she told the nurse to look after me and the baby so that she could go and have her bath since all her body was soaked with blood.

“In the process of checking me, she told me that I should turn and face the wall so that she could clean the blood. When I turned back, the nurse went inside the room where my baby was laying on a bed, as my room was different from my baby’s room.”

However, when the mother turned back, the victim said she saw a woman wearing a hijab entering inside the baby’s room; the nurse was inside the room with the baby, the mother said.

The mother had thought the hijab-clad woman was there to speak with the nurse.

“A few minutes later, I heard that my daughter was no where to be found. When we discovered that the baby was missing, my mother in-law, who the nurse had sent on an errand alongside my husband, asked her about my baby, but she could not give any satisfactory explanation.”

She claimed that the nurse later became rude to everyone, acting nonchalantly to the matter.

When contacted, police public relations officer of the State Command, Willy Aya, confirmed the incident and said the nurse was already in police custody helping them in their investigation.