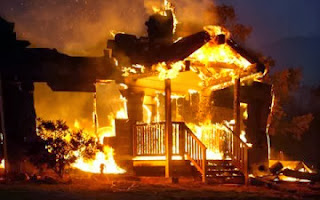 A Lagos resident identified as Jide Ojoola and son of the Balogun of Ejigbo, has been burnt to death in a fire which consumed his father’s residence at Aminatu Ilo Street, Ejigbo, Lagos, western Nigeria.

Neigbours said the father of the victim is the brother of the Ojon of Ejigbo, Oba Moruf Adekunle Ojoola.

The fire, according to witnesses, started around 2 a.m. on Tuesday and burnt the late Jide, who was asleep, to ashes before it was put out.

Other occupants of the house, it was gathered, ran out when the fire started, unaware that Jide was sleeping in his room.

Properties worth millions of naira were destroyed in the fire.

Investigations revealed that the fire, caused by a burnt out candle light, started from the victim’s apartment.

The deceased was alleged to have lighted the candle and forgot to put it out before he slept.

Neighbours revealed that the late Jide attended a party a day before the incident and returned home late.

“It was the candle that he lighted that caused the fire. When he came home, there was no light, so, he had to light a candle. The fire burnt everything in the house,” the neighbour disclosed.

The charred body of the late Jide has been recovered and deposited at the Isolo General Hospital, for autopsy.

When our reporter visited the residence, sympathisers gathered in front of the house, discussing the tragedy.

Efforts to speak with the father of the deceased proved abortive, as he declined to speak on the incident. “I’m not in the mood to say anything,” he said.