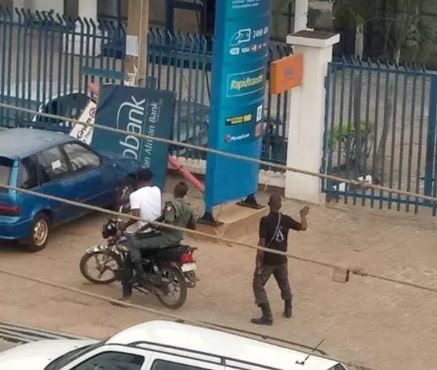 Some vigilant policemen and members of vigilante groups in Lagere area of Ile Ife Osun state today foiled an attempt by some robbers to raid about 7 commercial banks in the area.

According to Punch NG, the robbers who arrived at the scene in a bus and Toyota Camry shot sporadically into the air to scare people away but policemen attached to the banks and members of a vigilante groups responded with a superior fire power, forcing the robbers to flee.

Here is what one of the eyewitnesses of the foiled robbery attack said this afternoon:

“When the robbers arrived Lagere, they parked their vehicles a few meters away from the banks.

“You know, about seven commercial banks have branches in the area. At the time they arrived, activities in the area were just picking up. Customers were moving in and out of the banks.

“They suddenly began shooting into the air to scare people away; but policemen attached to the banks and vigilante boys responded with stronger force, shooting at the direction of the robbers

“The robbers escaped through Akarabata area, Modakeke; and moved out through Ondo road.

“They were given hot chase by the combined team of policemen and vigilante boys”.

Amanda Yates Garcia, 300 Year Old Witch Who Casts Binding Spell On Donald Trump Reveals Why She Did It
Ronaldo Picks Wedding Date A Week After Engagement