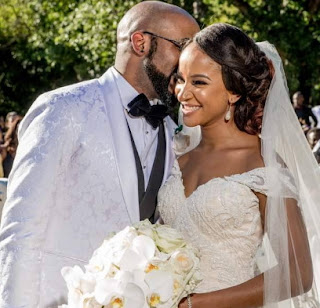 Newly married EME Boss, Olubankole Wellington today mistakenly shared a unclad snapchat video of his wife in her g-string undies as he was recording their honeymoon experience in South Africa with fans.

In the video which has since gone viral, Bankole was telling fans how amazing their experience South African was as he mistakenly took a shot of his wife in her g-string underwear.

Though he quickly removed it, it seems the damage has been done as his curious fans who got hold of the video leaked it on the social media.

Here are some reactions to the now deleted Snapchat video.

Last week, Omotola urged the couple to take their family matter off the social media but it seems the young couple are social media addicts who can go to any length to keep their fans at home and abroad engaged.

In everything give thanks!!! **wink**

Banky W should count himself lucky he didn’t show his wife’s frontal asset to the world, that would have been so disastrous.

Wonder what Kunle Remi is thinking.