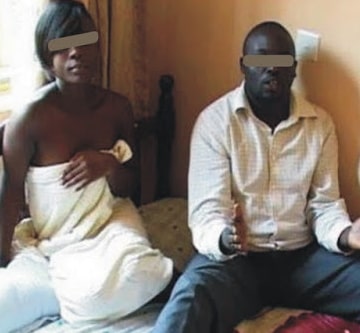 A lady, identified as Aishat Odofin, has been duped after she parted with N700,000 to a self acclaimed Islamic cleric a.k.a Alfa Adeyemi Mutairu, in order to be delivered from evil forces to become successful in life.

It was gathered that the prophecy and prayer involved that the victim will be stripped naked before the Islamic cleric will bath her with his own hands and then embark on the deliverance prayer.

The incident happened at Ejigbo area where Aishat met Mutairu and he gave her the false prophecy that seemed to have ruined her life.

The lady paid the said amount of money and the prayer was conducted but it did not work as her condition became worse. It was then that she realised that she had been duped by the Islamic cleric and asked that her money be refunded to no avail.

The matter was reported to the Ejigbo Police Division; Mutairu was arrested and detained at the police station.

During interrogation, the suspect admitted that he obtained the money which he claimed was used for the prayer but the victim explained that the prayer did not work and she was hypnotized to part with the money.

The police charged Mutairu before Ejigbo Magistrates Court for obtaining the money under false pretence.

The prosecutor, Inspector G. Simon, did not oppose his being granted bail. Thus, the Presiding Magistrate, Mr. L.K.J. Layeni, granted him bail in the sum of N100,000 with two sureties in like sum.

Mutairu was remanded in prison custody pending when he will perfect the bail condition.

The matter was adjourned till 3rd February, 2019.