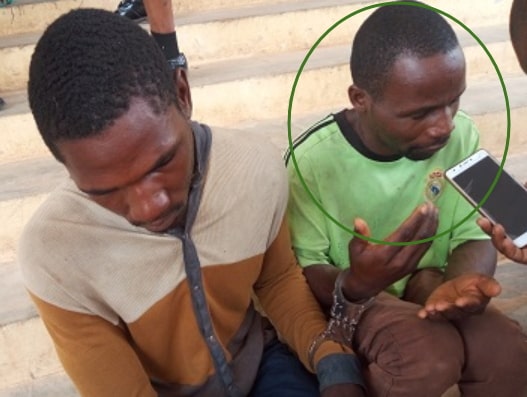 Police in Ondo state have arrested, a man from the Republic of Benin working as a private security guard in Agbogbo area of Akure.

Longbab Bouguen who allegedly raped a Celestial church prophet in Akure last was arrested alongside an accomplice, Daniel John.

The victim was heading to church around 8:30pm when Bouguen suddenly grabbed her and ejaculated on her dress after a bit of struggle.

Here is how the victim narrated her ordeal:

“I discovered that he was following me when I was going to the church and suddenly he grabbed me from the back and dragged me to one corner; I struggled with him but he overpowered me and showed me a knife, threatening to kill me if I shouted.

“I didn’t want him to stab me, because there was nobody around to rescue me. As he was struggling with me, he tore my clothes and my pants; I didn’t allow him to penetrate so he ejaculated on my body. Thereafter, he collected the money on me before allowing me to go.”

Confessing to the crime, the 39-year-old Bouguen attributed his action to the devil, adding that he could not explain what came over him.

“Though I attacked her and tore her clothes and pants, I had not penetrated her before I ejaculated on her body. I allowed the woman to go after collecting the sum of N700 on her,” Bouguen confessed.