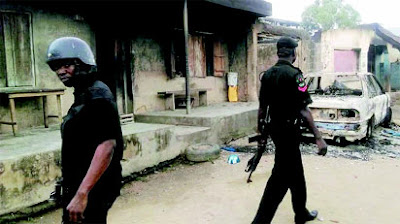 The two innocent kids kidnapped from their parents house at the Okedogbon area of Owo Local Government Area of Ondo State few days ago are yet to be found.

The tenant was alleged to have carried out the act seven days after she moved into the landlady’s house, which is located at Okedogbon area of Owo.

The two kids identified as Ayomide Olamilekan, six months old and Blessing Olamilekan, two years old, were abducted and taken to an unknown destination by the tenant who was said to be quite friendly with the children.

A source said the tenant and a man suspected to be her husband rented a room apartment from the mother of the abducted children, Mrs. Abimbola Olamilekan, and paid six months’ rent.

The source said the landlord did not have any information about the tenant up till the time she absconded with her kids, neither did she know any of the tenant’s relative in the town. It was, however, learnt that the kidnappers were from the South-South region of the country.

The lady was said to be washing clothes at the back of the building, when the tenant offered to assist her in taking care of her babies, since they were disturbing their mother. The tenant took the kids and vanished into thin air.

“The incident happened exactly seven days after the tenant and her husband moved to the house. The mother of the abducted kids was washing clothes at the back of the house and the six months old was crying. The tenant came around and offered to assist the mother to mind the crying baby.

As she carried the baby on her back, the second child too was also crying, so she took her along. She told their mother that she wanted to go and buy biscuit for them in a nearby grocery shop.

“The mother released her babies to her and it was after several hours that the tenant did not return with her babies that she raised the alarm.”

Another source said that after some days that the tenant and the husband did not return to the house, the search party in the area broke into the kidnappers’ room in the house, but found only bed sheet on the floor.

The PPRO said that the whereabouts of the kids and their abductors remained unknown as at the time of filing this report.

He said: “The mother of the victims had been invited, but she told us that she had no personal details of the tenant before giving her and her husband the apartment. This is wrong and careless. We’re still on it; we have commenced investigation into the incident. We will try our best to get the children back and arrest the kidnappers.”

Continue Reading
You may also like...
Related Topics:disguise, kidnappers, tenant