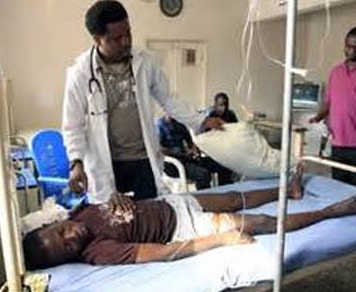 Residents of Ijegun in Lagos, expressed their shock over what they described as attempted suicide by a well-to-do young man who reportedly used a sharp object to slit his throat in his friend’s house over frustration. The incident happened at Bola Akinlere Street by Papa Major bus stop off Ijegun Road, ijegun, Lagos.

The 30-year old Olumide Akinlere, was said to have attempted suicide but was rescued by the friend’s mother who was around. She raised alarm and Olumide was prevented from killing himself but by then he had already inflicted injury on himself.

He was then rushed to a hospital and was later transferred to Lagos State University Teaching Hospital, LASUTH, in Ikeja area of Lagos. His case was said to be critical as he could not talk having already cut off part of his throat before rescue came his way.

It was gathered that what baffled the residents about the incident was that Olumide’s father had many properties in choice areas which he had handed over to him being the first child of the family after the father fell sick and got paralysed.

On his part, Olumide was said to have flourishing businesses and had not been known to have complained of any financial challenges among his friends in the area.

On the day the incident happened, Olumide was said to have visited his friend who lived close to his house but he did not meet him at home. While there, he was said to have used the sharp object and slit his throat. He shouted in pains and it attracted the mother of his friend.

He was rescued and rushed to the hospital in the pool of his blood. The matter was reported to the police at Isheri Oshun Division.

As at the time of filing this report, Olumide was still at LASUTH and the police were working to know the cause of his action.

It was gathered that the victim was unable to speak but had written a sort of suicide note. He said that it was depression and frustration that led to his action.

Continue Reading
You may also like...
Related Topics:cut, lagos, man, own, suicide, throat