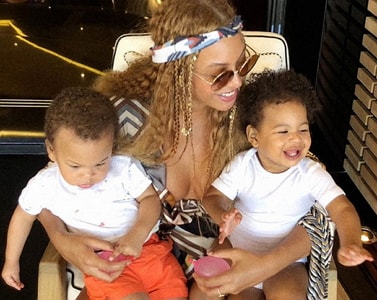 Pop superstar Beyonce has called for a greater acceptance of naturally curvy figures, saying she was listening more to her body after giving birth to twins via caesarean section in 2017.

The 36-year-old singer, one of the most photographed women in the world, posed for the latest issue of Vogue magazine without makeup, hair extensions or wigs.

“I think it’s important for women and men to see and appreciate the beauty in their natural bodies,” she said in the accompanying essay.

Beyonce, who is married to rap mogul Jay-Z, recalled that she had quickly tried to slim down after giving birth to her first child, Blue Ivy, in January 2012.

But revealing details for the first time about giving birth in June 2017 to twins Rumi and Sir, Beyonce said she had needed a month of bed rest and that her health had been at risk before undergoing an emergency C-section.

After giving birth, Beyonce — who said she weighed 99 kilograms (218 pounds) — felt that she “needed time to heal” from the effects of the surgery.

“During my recovery, I gave myself self-love and self-care, and I embraced being curvier. I accepted what my body wanted to be,” she said.

Beyonce made a triumphant return to the stage at the Coachella festival in April, dazzling fans with a nearly two-hour set of non-stop choreography with some 100 back-up dancers.

The singer said she had prepared for Coachella by going vegan and eliminating alcohol, coffee and fruit drinks from her diet.

But she added: “I was patient with myself and enjoyed my fuller curves.”